Atari Games' Tetris for Nintendo's Vs. System arcade platform is essentially a straight port of their other arcade version, and is more or less an older revision of the ill-fated NES port that Atari's Tengen subsidiary released a year later.

The game contains two button codes for managing the game's high score table, possibly for use by arcade operators. These codes can be entered with any combination of Player 1 and Player 2 inputs.

At the title screen, press Up + Down + A + B + Select at the same time. This will erase the high scores. 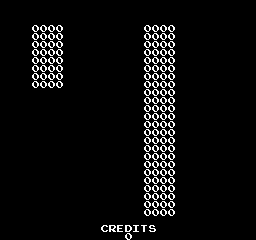 At the title screen, press B, A, B, A, Select, Select. This will display a system high score list. 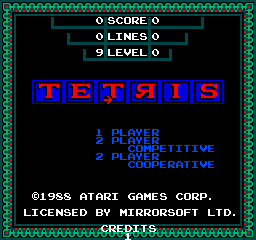 Game Genie code GAIUAI will re-enable a fourth game mode, a two-player cooperative mode with a CPU-controlled second player. On the console version, this is the fifth game mode and is called "WITH COMPUTER". Note that the cursor position is incorrect. 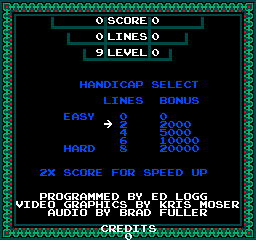 Game Genie codes TELUGG KULUIG will replace the level select mode with an unused handicap select mode, which is present (albeit rather simplified) in the console version. This particular screen has the cursor position slightly misplaced, but the options do work properly.

This screen also contains some Atari developer credits, which are not normally seen in-game.