The Battle Cats features an army of mutant Cats, ready to take over the world... and you're going to lead them to victory.

Note that only Cats not tied to collaboration events should be included here, as a lot of units in the Japanese version aren't in the international versions. 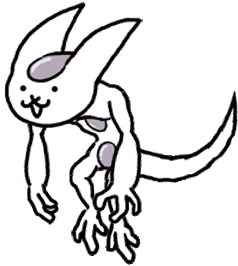 This Uber Rare Cat was only available via a time-limited event in the Korean version of the game, and is unobtainable in all other versions. It functions similarly to Filibuster Cat X, which is used, but can freeze all types of enemies instead of just White ones. It's used in the Nintendo Switch port, however, replacing Filibuster Cat X as the reward for clearing Cats of the Cosmos. 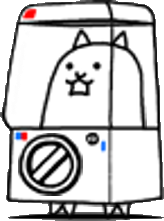 This Special Cat was accessed via a promotional event in Japan, where capsules from vending machines could contain codes that could be redeemed to get the Cat in the game. The event has long since ended, and unlike Capsule Cat, Squish Ball Cat, and Cat Bros., it was never released via other means. Like Evangelist Cat, however, it's used in the Nintendo Switch version of the game.

Like Pon Cat, this Ninja Cat recolour was distributed through a promotion with real-life gacha machines in Japan, and has never been rereleased. Also like Pon Cat, it's used in the Nintendo Switch version.

A Special Cat that was only accessible from a limited-time set of stages, or from entering a serial code. It's obtainable from Rare Cat Capsules in the 3DS and Nintendo Switch ports of the game, but not in any other versions. Its basic form is a cheap meatshield, but inferior to most others due to its higher price. Its evolved and True Forms are powerful-looking and have flashy attack animations, but are actually among the weakest units in the game. Strangely, despite being unavailable in the English version of the game, the enemy version of Mega Cat still shows up in the event stage Elite Corps (Insane), which is available to play in the English version of the game. 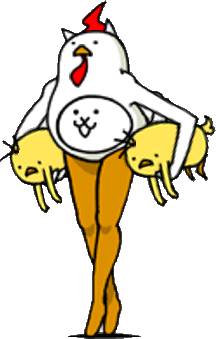 Another Uber Rare Cat, but this one is inaccessible in all versions of the game. Its basic form is a mid-ranged attacker, while its evolved form is a fast-attacking close-ranged attacker that occasionally produces wave attacks.

Enemy ID 21 shares Zoge's (ID 286) sprites and animations, but has completely different stats. This enemy slot has always been unused; it and ID 22 separate the enemies found in the original mobile phone version of the game, ending with The Face at ID 20, from the ones added later on, starting with Ms. Sign at ID 23. It seems that the slot was used to test Zoge's animations, and the developers simply forgot to delete the unused data. Also, in previous versions, the image file for this enemy housed a red Master A. recolour; this was presumably a beta version of Professor A.'s appearance in the final. 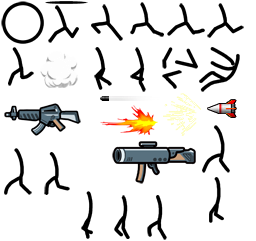 Mr. and his evolved form, Super Mr., use the same spritesheet internally, even though Mr. carries a shotgun while Super Mr. uses a bazooka. Also, the sprite sheet has an unused missile in it. This same missile would later be used in Tricycle Cat's spritesheet.

Tricycle Cat's spritesheet includes an unused greyscale version of the missile it normally shoots in its attack animation. 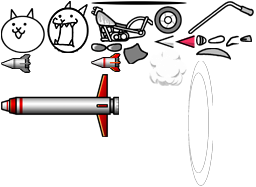 Biker Cat's spritesheet has considerably more unused sprites than its pre-evolution, including three unused missiles, a sonic boom, and a red version of the spikes it normally ejects from its front wheel to attack. It seems that it was originally meant to fire a much bigger missile than its pre-evolution; the missile is still present on the in-game model, but does not animate and is set to 0% opacity.

The spritesheet for Drumcorps Cat includes sprites for two additional Cats, a tuba, drumsticks, and particles relating to them. However, in-game, only the leading Cat with the baton is used. 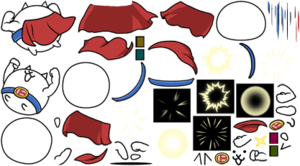 Supercat's spritesheet includes four rectangles, coloured dark yellow, cyan, magenta, and dark green, respectively. These are not assigned to any parts on the model. Strangely, they're also nowhere to be found on the spritesheet of Mightycat, the basic form.

There's an unused impact effect on Bakery Cat's spritesheet. Technically, the sprite is used during gameplay; however, it's set to 0 opacity, so it never renders during the attack animation. It also appears on Boomerang Cat's spritesheet, where it "animates" in the exact same way. 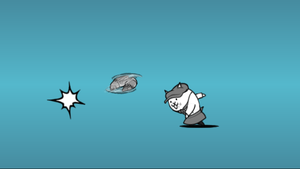 Here's what it would look like if restored. It's probably for the best that it was scrapped, as it doesn't appear anywhere near where Bakery Cat would usually target enemies.

Graphics exist for Talent Orbs that target traitless and Relic enemies. However, these orbs can't be obtained in game, so the graphics go unused.