The Curse of Monkey Island

Monkeys! Monkeys! Monkeys! Guybrush Threepwood! Spanning two CDs, it is also known as the first game in the series to have voice acting, first to have not been written by Ron Gilbert, and the last to use the SCUMM engine.

After booting up the game, enter matilda on the keyboard. Then, press Ctrl, Shift and D together. At any time Guybrush is on the screen, press one of the following key combinations:

An early, badly drawn arm for the banjo duel.

A placeholder boat for ship combat.

Type actor 2 costume 227 in the ScummVM debugger (ctrl+d) to turn your ship into this.

An unused animation of Snowcone Guy flavoring a snowcone.

Type actor 2 anim 6 in the ScummVM debugger at the Carnival to play this animation in-game.

Early placeholder animation of Wally in the torture chamber diorama.

Animated inventory items have 5 frames, but only 4 are shown in-game. The unused item frames:

Animation from the demo, like Guybrush crashing through a door after firing the cannon and Wally's tears (type actor 2 anim 30 in the ScummVM debugger near Wally), were also left inside the game's files.

This was abandoned as a usable item. In the final version of the game, Guybrush automatically drags it down to the beach in a cutscene.

Type object 940 pickup in the ScummVM debugger outside the Goodsoup Hotel to have this in your inventory. 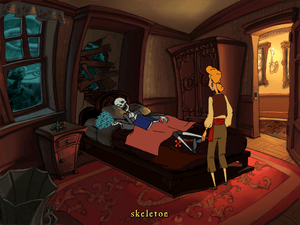 There are unused guest-room-mints which were intended for the skeleton in the Goodsoup Hotel guest room.

Type object 1047 state 1 in the ScummVM debugger while in the guest room and its graphic will appear in the skeleton's hand.

Audio for the unused object, /GRNZ342/mints. 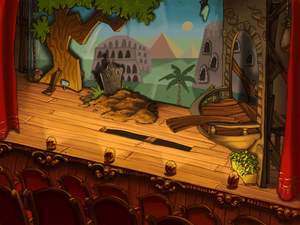 There's an unused stage-floorboard-anim-object object in the Puerto Pollo Theater Stage area. While this is technically seen in the cutscene where a cannon ball lands on the floorboard, it was abandoned as an interact-able background object. In-game, the floor is back to normal after the show.

Other unused objects which may have been associated with this are: /SGNZ487/missing floorboard to /SGNZ491/.

This line is heard in-game with a pitch effect after using the helium balloons. Here's what it actually sounds like:

After Guybrush downs the spiked drink, the following lines are heard in-game with a distortion effect. This is what they actually sound like:

Objects with nothing but a name. 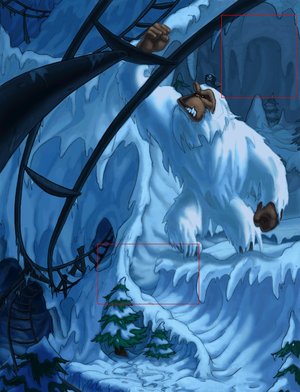 There are two unused objects in the Snow Monkey diorama area which suggest that there were supposed to be more pirates on the ride: pirate-sledders-object (left square) and pirate-skier-object (right square). Their intended locations can be seen in red. It's possible it was meant for an earlier version of the background. 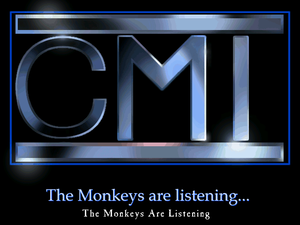 The Monkeys Are Listening

When the "The Monkeys are listening..." screen appears, type script 2004 run and then script 2005 run in the ScummVM debugger and an unused subtitle will quickly play.

On Rottingham's Ship, script 2005 will crash the game if you try to run it.

There is a short, unused animation of the candles in the Voodoo Lady's room getting blown to the side by wind.

To see this, have the Voodoo Lady on-screen and type script 2011 run in the ScummVM debugger.

The song "A pirate I was meant to be" is not present in most if not all non-English versions, probably because it was too difficult to translate all the rhymes.