The Flintstones: The Treasure of Sierra Madrock

The Flintstones: The Treasure of Sierra Madrock is yet another in a series of corny rock-themed puns.

Using the Pro Action Replay code 85B7E780 (US version) enables a debug/cheat mode of sorts. Each section below assumes that this mode is active. 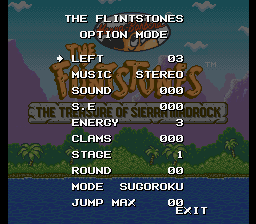 When the "press start button" text appears, hold down L + R and press Up, X, Down, B, Left, Y, Right, and A. A sound will play to confirm you've entered the code correctly. Now the options menu is expanded with several new options.

During the game, press any of the following on controller 2:

Also, there are 3 button sequences for controller 1 which can be activated while the game is paused (they must be done in this order). The currently playing song/sound will change to indicate that the code was input successfully. 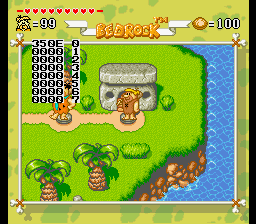 When bit 0002 of $1F79 is set, this display appears on the map screen, showing the values of the eight 16-bit words between $1F7B and $1F89. What each one represents is unknown, though the first one always seems to be set to 350E when leaving a stage.

There is no apparent way to enable this feature without manually editing RAM.