Mickey and Minnie investigate a circus mystery. Well, to be clear, only one of the six stages takes place in a circus. And there isn't really much of a mystery. Mickey and Minnie, though? They're definitely in the game.

Identifying numbers for three tilesets. G22-02 is used for the trees in The Jungle, and both of the G24 sets are used for The Jungle's boss area.

A heart is hidden in the first tileset of The Jungle. 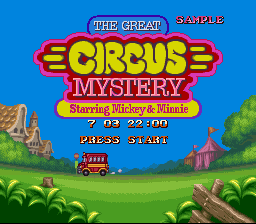 Use Pro Action Replay code C1B87837 to view text from an older title screen with SAMPLE and build date.

Text for a possible debug menu. Starts at 0x00DC26.

This text is used as filler in the ROM. The text is the same in all regional versions of the game. Similar text can also be found in Goof Troop.

This text only appears once, at 0x008020. The region tags are different between regions, of course. This same text also appears in the Genesis version.

A build date can be found at 0x07FFC0. This differs between versions. It's possible that these build dates were never updated properly for the final ROMs.