A cute girl is Humanity's Last Hope™ and goes to blow up the Death Star the alien-infested planet NAJU in Compile's shoot-em-up/Zelda hybrid.

At any generic message panel, press Select to enter the Map mode, then press Select to exit it but do not release the Select button after the level appears. Press the B button to skip the current conversation line when the blinking cursor appears, as usual. But now, when the current message is over and there is no more blinking cursor on the screen, you are able to see the next message from the message library if you press either A or B. This could possibly be a debug routine that was accidentally left enabled within the game. Note that the Japanese version of the game doesn't check for the total messages count and will hang if you try to skip after the last message in the list. In the US version, this was fixed for some reason.

When starting after a reset, the game performs a simple mapper test. It tests every bank from 0 to 7 and sets each respective number in turn at $BFFF. If the number of the bank and the number written at that address doesn't match, the game will set the BG color to one of the colors according to the bank number and hang. So if you see a particular color screen when the game boots, you will know which bank isn't switched correctly. 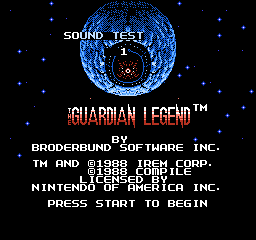 Hold A + B on controller 1 and hit Reset to get the game's Sound Test.

Press Left/Right to scroll through entries (1~71), Down to play the selected sound, and Up to stop. Sound #70 is pause music, and Sound #71 is resume music.

The original Japanese Famicom release is titled Guardic Gaiden, showing that it's more obviously a spin-off or follow-up to Compile's previous MSX game Guardic, which was never released outside of Japan. The international NES release was renamed The Guardian Legend, losing this connection.

Additionally, the Japanese title screen says "PUSH START", while this was changed to "PRESS START TO BEGIN" on the international releases.

The intro was revised for the western releases. The oddest detail about the original passage is its reference to "women warriors", when the game clearly features a single hero.

In the Japanese version, you can enter the password "えいえるじい" to access a bonus mode where you go through all the scrolling shooter stages. For the North American and European version, the password was changed to "TGL".