The Guy Game tries to be titillating by offering topless girls filmed during a Spring Break, but it's really not worth the player's time or effort.

A few months after the game's release, one of the featured girls filed a lawsuit against Topheavy, Gathering, Sony, and Microsoft claiming that not only had she not been told that her footage would be used to promote the video game, but she had been 17 at the time. Given that this made the game very much illegal, she was granted a temporary injunction pulling the game from stores - and Topheavy, seemingly not one to know when to fold 'em, released a DVD called The Guy Game: Game Over which contained the footage filmed for the game (minus the illegal stuff) plus extra content. 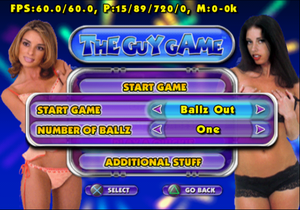 This option lets you press L2 on PS2, WHITE on Xbox, and Z on Windows to cycle through two debug options.

The first one displays the current framerate and how many particles are being rendered. There's also a memory section that seems to be non-functional. 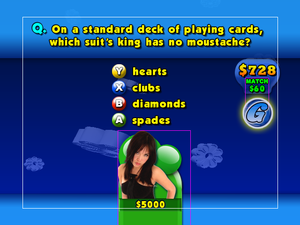 The second display draws a colored outline around most objects on the screen. It does not seem to work on the PS2 version. 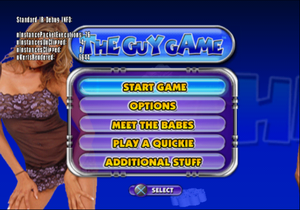 There are four (technically five) displays, all of which display the statistics for nInstancePacketExecutions, nInstancesUnClipped, nInstancesClipped, and nVertsRendered in the upper-left corner. These displays are only present on the PS2 version.

The fifth display is a duplicate subroutine of Standard IR Debug INFO that never gets called by any other function. The first Standard IR display can be replaced with this second one using this code: