Don't be a dummy, buckle your safety belt!™ 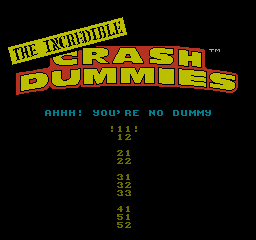 At the title screen, press Right, Right, Up, Left, Up, Right, Down, B, A, Select. A sound will confirm the correct code has been entered. Now, press Start and a screen with the message, "AHHH! YOU'RE NO DUMMY", will appear. Choose the desired level by pressing Up / Down, and press Start to play. 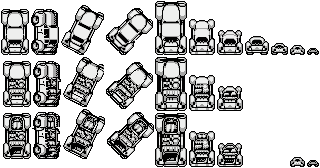 Sprites of cars from the Game Boy version's mini-game, which aren't used anywhere in this version.

Sprites of helmets falling down left over from the Game Boy version.

Sprites of dummy falling down left over from the Game Boy version.

Interestingly enough, both Game Boy and NES versions use the same soundtrack, but some of the tracks are only heard normally in the Game Boy version. Some of the tunes are also unused in both versions.

Since the NES version doesn't have any mini-games, these two tracks don't play anywhere.

While the NES version does keep track of your score, it doesn't have a screen for the top 10 high scores like the Game Boy version.

A placeholder message for the level 4 cutscene, located at 0x35220. (The game uses the same character for the number zero and the letter O.)

Located right below the above message at 0x35240.