The Labyrinth of Time

The Labyrinth of Time is an adventure game from 1993, loosely based on Greek mythology. It was the only game published by Terra Nova Development, and although wasn't especially financially successful, one of the collaborators on the original game re-released it in 2004 for modern computers and in 2009 for iOS.

The Museum on the Moon contains graphics and text for two unused monitors for exhibits on display. Unlike all other exhibits, both images are centered rather than aligned to the left or right. 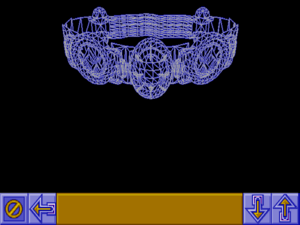 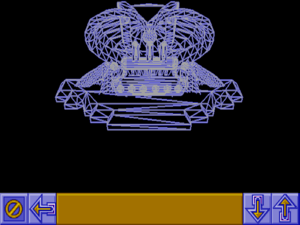 The sound WEIRD1 plays when using a teleportation device (which appear at four different points in the game) or when transitioning into the end credits. However, the game contains four alternate versions of the sound effect. Two of them - CWEIRD1 and CWEIRD1O - are identical to the original.

The other two - CWEIRD3 and CWERID1 - have a humming sound in the background and are twice as long, albeit with more dead space for the humming.

It's worth noting that in the game, WEIRD1 plays twice during transitions. The longer versions of the sound might've been intended to cover the entire teleportation effect.

Also interesting: do the "C" prefixes indicate that the sounds were "cut"? Or something similar?

There are also two older versions of the BOOM sound effect. The BOOM sound fades out halfway through, while BOOMOLD stays at a loud volume throughout. BOOMOLD1 is a shortened version of BOOMOLD.

In the room in the Ziggurat with the permanently locked door, walking north into the wall with two statue heads will show text associated with walking into a closed door. It is unclear if this is leftover from an earlier layout or just a mistake.

Entering the Ziggurat without a lantern should display a totally black screen, SPICT/ZIGINT/BLK (or PICT/ZIGINT/BLK for the low-resolution version). The actual filename for the screen is SPICT/ZIGINT/ZIGINT.BLK, so the graphic is not loaded.

However, the game displays a black screen when an image fails to load, so there is effectively no difference even though the file is technically unused. Whoops!