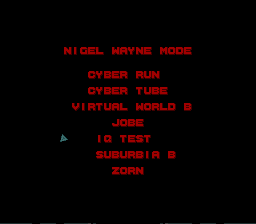 A few special features will be available, some of them used for various kinds of stage selecting/skipping. To use them, pause the game again, input one of the following button codes, and then un-pause.

Note, that L and R in all codes above may either be the Shoulder or the D-Pad buttons.

The game (and the movie) are known as Virtual Wars in Japan.

Oddly enough, but only when the cheat mode were enabled, upon entering a name on the high score table, the game will check an internal list to detect swear words. When you're about to enter the last letter, the game will exclude it from the input list so you can't select it.

The game's credits list one "CRAIG" as a playtester, and credit "REAL" for composing some of the game's music. "SEGA" and "SONIC" also forbidden. The final three entries mean shit, cock, and pussy in Swedish, respectively.