The Legend of Prince Valiant (NES)

The Legend of Prince Valiant is a side-scrolling action game in which the player takes on the role of Prince Valiant. The game is licensed from the television cartoon series of the same name which in turn is based on an older comic series. 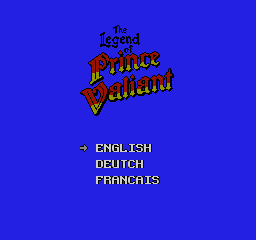 Press Select, Up, Left, Right, Down, Left at the title screen, screen will flash with b/w colors.