The Legend of Spyro: Dawn of the Dragon

A few recolors exist in the game, but can never be seen during normal gameplay. In addition to this, two additional Rockrats exist. All but the Armoured Rockrat have models and perform as expected if hacked into the game.

Seen in TestLevelNewFeatures only, this grey box pushes Spyro/Cynder across on the floor. You can beat it up, and after a while it will get back up and continue. If you knock it too far out, it becomes almost motionless. 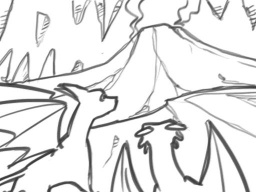 In the folder containing the cutscene images is an early sketch. 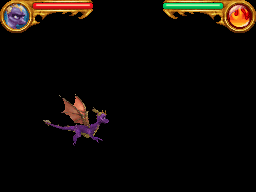 An exciting level comprised of pure darkness, which (seemingly) goes on forever.

A level with no background that contains the elemental gates found in the game, a moving platform, a cluster of crystals and a character appropriately named 'TestCharacter' (seen above). Although it's possible to go all the way left, it strangely cuts off abruptly on the right side, but the gate there can still be activated.

An early version of the final flight sequence. Most enemies are absent, and Spyro (or Cynder) leave the level boundaries sometimes, and occasionally turn upside down. The camera also gets confused at parts, and most of the level lacks any sort of collision detection. When completed, the game returns you to the beginning of the level and soft locks.

A build date can be found in buildinfo.txt.