From The Cutting Room Floor
< The Legend of Zelda: Link's Awakening
Jump to navigation Jump to search

This is a sub-page of The Legend of Zelda: Link's Awakening.

Due to the way rooms are set up in Link's Awakening, some older room layouts can be found. The old layouts are covered up with different tiles. These older layouts are hidden in all versions of the game.

The flowers around the rooster statue were originally bushes.

The fisherman's house is built on top of six tiles of grass, probably there before they remembered to give the poor guy a home.

The lone tree in the center was replaced with a row of skull trees, likely to force the player to walk through the entire graveyard instead of just skirting the top row.

Stairs were added to this screen, making it so that you can bypass the Mysterious Woods after you beat Level 2.

The stairs on this screen cover up another waterfall, which would have been used as a one way path down the mountains. Since the lack of this staircase makes it impossible to go further up, there might have been a different way to climb the Tal Tal Mountain Range in earlier versions.

Yarna Desert's entrance once featured two palm trees in the center. This was likely before the animal skull tiles were in the game.

This room's chest was changed from being out in the open to appearing after all enemies are destroyed. In the final room layout, the early chest is hidden behind the decorative tiles. 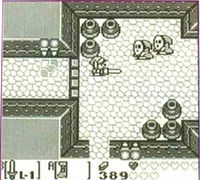 The doorway in this room was widened while the torch was hidden under a corner tile. This is actually a remnant of a layout seen in a prototype image of the game.

The empty chest room had some item bottles added to it for the final version.

Minor cosmetic change. Two more statues were added to the lower left of this room.

More bottles were added to the back row in the final.

Probably just changed for convenience purposes. In the early layout you can't look at the next room unless you go up the stairs. The final version's layout lets you do just that.

This room has a lot more pits than what's seen in the final. They were covered up to both make the room easier and to make room for the stone slab / owl statue.

The Eagle Tower boss fight was supposed to have animated clouds in the background instead of the still clouds that finally got used. A tile layout for this is loaded on every map transition from dungeon to overworld (and even vice versa!). Currently it doesn't seem to be utilized at all.