The Legend of Zelda: The Wind Waker/Unused Textures

The file wood_piece_01.bti contains an old version of the sign background texture, and is identical to the one seen in a picture from E3 2002. 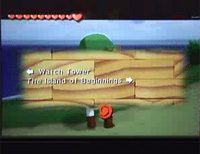 This texture reads "wind direction" and may have been used on the compass. Its filename is kazzamuki, a misspelling of kazamuki (風向き), which is what it says in Japanese.

The textures below are listed according to which room or map they are found in. The rooms/maps are listed by a proper name, if they have one, and are followed by their internal name within the game.

This texture is found inside the door to Orca's house.

The textures are quite nice, but don't quite fit with the cartoon style of the game.

Some of these are kind of odd, and their quality suggests that they were cut relatively early.

Test textures for water and rocks, respectively. Their file name indicates that they were once used for the volcano (kazan in Japanese).

Tower of the Gods, Siren

Used in the early rooms of the Tower of the Gods. Note that H_bz01 and H_mon01 are used at least once: H_bz01 is the ceiling of the room where the three statues activate the teleport up, and H_mon01 is part of the ceiling on the top floor of the Auction House.

This room, probably one of the strangest in the game, has only two textures. The second texture features what seems to be an Ocarina of Time-style fairy.

Some of these come from older versions of the game, while others are only test maps. The mini-maps below are in a folder named "dat", used to display mini-maps on-screen.

The mini-map of Outset Island from E3 2002 that would be used for the room DmSpot0.

A test mini-map of the Tower of the Gods. It looks like its first room. Notably, this map corresponds to the bottom plane found in the room's model. The final model only uses a portion of that plane, meaning that this version of the mini-map was made when all of its space was in use. (Siren)

The mini-map of the room of the Darknut mini-boss, without outlines. (Siren)

The mini-map of an old version of the boss room of the Tower of the Gods. (Siren)

The mini-map of an old version of the top of the Tower of the Gods. (Siren)

A mini-map used in the Earth Temple. However, it used to belong to the Dragon Roost Cave. (M_Dai)

A test mini-map of the Wind Temple. There is some Japanese writing saying "工事中 (koujichuu)", which translates to "under construction". (kaze)

With the zoom, you can see a very different map where there is also written text. 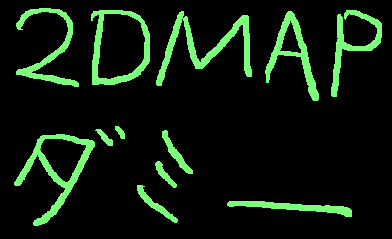 Another unused mini-map in room 3 in "Cave08", the old version of the Wind Temple. It seems that this is an old mini-map of the mini-boss in the Dragon Roost Cave. (Cave08)

The following mini-maps are different from the mini-maps above. Firstly, they are in a folder named "tex" which isn't in every game map/room group, like "dat" is. There are only three mini-maps with two different sizes, small like normal maps and large. They are much older, too. 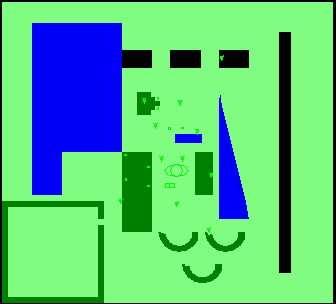 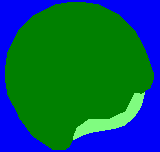 This map would be used for the rooms A_nami and VrTest. 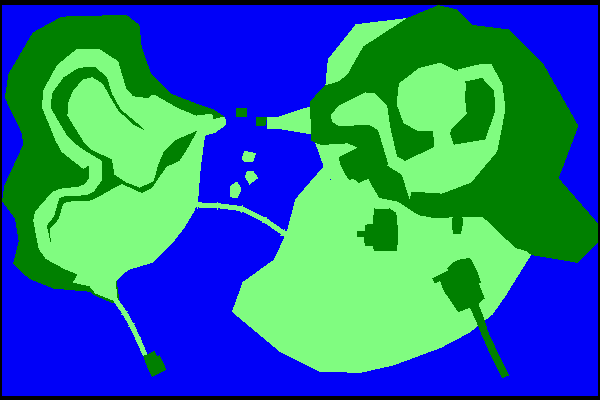 Perhaps the best unused map: a very old version of Outset Island, much older than that from E3 2002. It is very different from the final version (DmSpot0 and others). This map is rotated 180 degrees compared to its later counterparts.

There are six photos visible in Link's House, but there are two extra that go unused. Of the eight photos shown here, the 2nd and 3rd photos with Link go unused.

Sturgeon's Room (both used and unused versions) and Rose's House have this texture found in their model file. Both places only have three photos frames hanging on a wall. Of all of the photo frames, both places combined only seem to use photos 1,2,6 and 9 starting from the top. The other photos (3,4,5,7,8 and 10) seem to go unused. Photos 3,5 and 7 are pictures of Windfall Island. Photo 4 could be a beach on just about any island and photo 7 could be a picture from just about any island as well. Photo 10 is a picture of the constellation Orion.

In the room tincle and in the file "Stage.arc", some early cloud textures can be found. The room KATA_HB hosts the first three of these textures, as well.

Three models for the Sage Stone exist- one for Makar, one for Medli and one that replaces the previous two for the "crumbling" effect. While not mapped to the model, the "crumbling" Sage Stone has early designs for the Earth Sage Stone in its textures. Interestingly, the space which contains the Wind Waker directions in the two used Sage Stones is filled with an Ocarina of Time and Majora's Mask-esque musical score. What this could have been used for is unknown.

If the musical score was meant to be played with the Wind Waker, it is impossible since the Wind Waker only allows up to 6/8 time (6 inputs), and the score contains 8 notes. It doesn't really sound like any melody in the final game when "played", and even playing it with an ocarina (from the N64 games) reveals nothing. 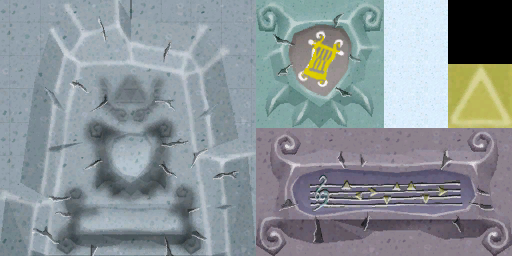 This is the texture for Cyclos' shrine on Dragon Roost Island. The blue arrow is not mapped to any part of the model, and thus goes unused. Its purpose is unknown.

In the unused "Room 16" in M_NewD2, it is possible to see a different lava pit. In very old versions of The Wind Waker, the lava used a background layer.

Compared to the final version, it is static and doesn't give off any light of its own (so it looks very dark); thus it was most likely a placeholder. It is visible in the room, but only when not covered by the final version of the lava, some of which was added into the room. The easiest way is to look in the corner near the start, as shown in the screenshot.

Small Red Arrow on a Texture in the Forsaken Fortress

On a texture of Forsaken Fortress, there is a little red arrow indicating a possible direction of contours.

This eye texture is found with Maggie's poor model. The name of the texture is "pm_eye.5.dds". Judging from the name relative to her other eye textures and the fact that it has a '5' scrawled on it suggests that it was either a frame of animation or a different eye pose altogether. Out of 5, Maggie's model only uses the first 4 textures. This unused texture looks the same as the 4th texture except that the 4th texture has a pupil in it.

Like Maggie, Mila's rich model also has an unused 5th eye frame under the name "km_eye.5.dds". The same information that applied for Maggie's eye above also applies to this eye.

When the player is formally introduced to a new area, a namecard will pop up at the top of the screen to give the player its name. The following images are unused.

There is no "Fairy Atoll" in the final game. It could perhaps be referring to Mother Isle, where the Fairy Queen lives.

Hyrule exists in the final version of the game, but it is never identified as such – especially since the first time the player sees the kingdom, its identity is kept secret.

Dungeons and benign locations have unique swirl graphics that frame the text. This version of the Tower of the Gods' namecard is shorter than the one that is used, and also uses the benign swirls. The reason for this is unknown.