From The Cutting Room Floor
< The Legend of Zelda: Twilight Princess
Jump to navigation Jump to search

This is a sub-page of The Legend of Zelda: Twilight Princess.

An early icon of the Ordon Sword. It looks really similar to the icon from the E3 2005 demo and might even be the same one. The most curious part is perhaps its insane size, exceeding even the length of the text boxes. It has no function when used.

While the item is called Fire Arrow in English, its function name and Japanese name suggest it was instead the Light Arrow. The item is non-functional. 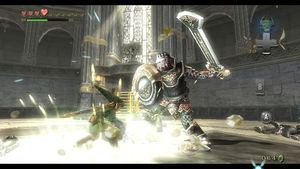 The final version of Twilight Princess does not feature a magic meter. However, a meter can be seen in screenshots from late 2006, one of which made it onto the back of the game box.

This item is functionally similar to the unused Green Chu Jelly item, and differs from it only in name.

Additionally, due to a developer oversight, it is still possible to obtain one of these magic-refilling green potions in the Wii versions of the game. To do this, go to the Cave of Ordeals, and fight your way downward to the level with several Chus. There, it is possible for a blue and yellow Chu to merge into a green Chu. Killing the resulting Chu awards you with a Green Potion, though the item does not have any text attached to it. As Link no longer has a magic meter, drinking it has no visible effect.

While this jelly still exists in the data of the GameCube version, it cannot be obtained. This is because the functionality of blue and yellow Chus has been amended, and the two now form purple Chus when merged.

Curiously the ability to merge the two Chus into a Green Chu was inserted back in the HD remaster despite being based on the GameCube version. Brand new text was also added referencing the fact it does nothing any more.

This item is fully functional. Drinking it causes Link to lose one heart, similar to the Nasty Soup item you can receive from Coro in Faron Woods.

Four copies of this item exist. Their position near the other dungeon items at the end of the item list suggests that they were also meant for a dungeon. Indeed, the Arbiter's Grounds featured Poes who stole the fires from torches, similar to the Poe Sisters in the Forest Temple in Ocarina of Time. It's possible that you originally had to bottle the Poes' fire and return it to the torches that way, rather than the flames just floating back to the torches on their own.

This item uses the Hylian Shield icon. It is the original version of the leaf Link uses for snowboarding at the top of Snowpeak. The internal name for the snowboard item is "Shield Surfing", indicating further that Link would have used his shield to sled down the mountain rather than the Ice Leaf, similarly to the mechanic in Breath of the Wild.

Retrieved from "https://tcrf.net/index.php?title=The_Legend_of_Zelda:_Twilight_Princess/Unused_Items&oldid=949246"
Categories:
Cleanup > To do
Subpages