Another popular Disney licensed game, this one actually had Disney animators working on it! 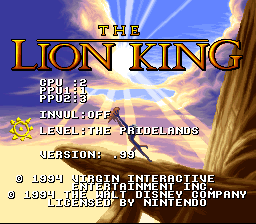 In Options, press B, A, R, R, Y (for programmer Barry Green) to access the debug menu. This menu deserves special mention for being one of the very few that will easily tell you the CPU, PPU1 and PPU2 versions of your SNES console, which is useful info for testing hardware and software compatibility. 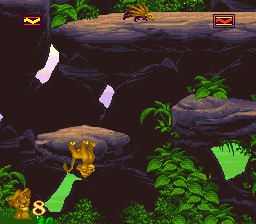 While in the BARRY cheat menu pictured above, press R, A, A, B (the same button sequence used in the Sega Genesis version to open the cheat menu). This unlocks an upside-down mode, that flips Simba upside down.

About 15 seconds of "To Die For" cannot normally be heard in-game, as The Stampede ends before the track has a chance to loop. The full theme can be heard in the game's sound test.

In early prototype versions of the game, this stage was long enough to allow the music to properly finish looping. It was cut down later in development, but the music wasn't abridged to compensate.

A couple of early sketch sprites of adult Simba still exist. More of these can be seen in an early prototype.

In "Be Prepared", there's a secret passageway near the end of the upper level, where you can move left through the wall to gather some items. When the top layer is removed, a hidden continue can be seen on the same path.

If you try to jump along this path, Simba will be unable to do so until you reach the area just underneath the continue (which still cannot be seen with the top layer on). However, there's a hidden barrier preventing Simba from grabbing it. This isn't present in other ports of the game, where Simba just manages to grab it with his back.

The Japanese version uses a thicker font for the main menu and level titles. (This thicker font is used in all versions of the Genesis/Mega Drive version of the game for level titles.) The "Licensed by Nintendo" text is removed, moving the Copyright text down.

The Japanese version translates the Options menu, and darkens the background when you enter it.

The Japanese version adds subtitles underneath the English level titles.

The Japanese version also fixes a small graphical error in Can't Wait to be King. The rhino's shadow displays the second palette instead of the first. The text for this level is much higher.