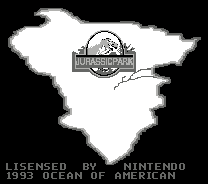 Tiles for an alternate title or intro screen based on the SNES version's Mode 7 intro (with some glaring typos) can be found in the ROM. Though no tilemap data exists, the screen can be reconstructed fairly easily based on the layout of the tiles, as seen above.

Tiles reading "Jakeshon Park", present in the CHR bank for the first part of the intro cutscene.

Mostly overwritten text from an early version of the third part of the intro cutscene, present in its CHR bank. It's spaced differently and uses a different color than the final text.

In the CHR bank for the game over screen, there's some unused copyright text crediting the game to Jakeshon. Oddly, the copyright year here is 1997 despite it being 1998 on the title screen.