The Ooze (not to be confused with the Action 52 game) is the story of Dr. Daniel Caine, who has been turned into a mass of ooze after discovering the cruel intentions of his employers...and wants not only revenge, but also a cure.

Three unused songs can be accessed from the sound test, but aren't actually heard anywhere in the game. It's unknown where any of these songs were supposed to be used. 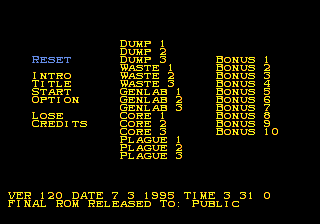 In the options menu, without changing the default control method, go to the top of the screen to the sound test area. Set the following audio numbers, and press C after each entry:

The "Yes!" sound effect will confirm it was entered correctly. Now, hold A and press Start to open the menu. It can also be opened anytime during gameplay. 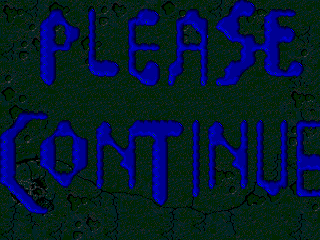 The Ooze lacks a continue system, but a cut continue screen can be accessed by starting the game with the Game Genie code DBZT-AAH6. The text can be changed to say "DON'T CONTINUE" by using the D-Pad. It is unknown how early in development the continue system was cut, or why.