Deadly flying books, humpty-dumpty, and a bag of gooey eyeballs make fun out of reading.

Both songs come from the prototype version though the latter is an early version only found in the dumped early build.

Originally the music found in all bonus levels and Timed-Zones. Unused in the final. Can be played by using the Title Screen music modifier code B0850D13.

An early version of The Stormy Sea music. Changed in the final version.

At any time during the game, press B, A, L, Down, Y, B, A, L, Down, Y ("BALDYBALDY") to activate cheat mode. This will unlock all worlds and levels, as well as allow you to exit the current level by pausing the game and pressing Select. (Rather amusingly, it will also replace some names in the ending credits with the word "CHEATER".)

Oddly enough, the game only keeps track of correct button presses and does not reset the current position in the sequence if the wrong button is pressed, meaning you can just mash all the buttons a few times to activate the code. 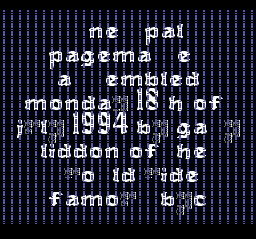 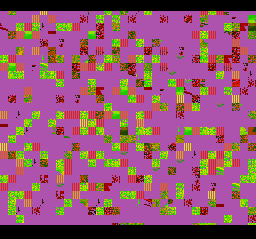 Old, broken code exists that was meant to display a developer's message by holding Select while turning on the console. However, the code checks whether the button was pressed, not held, making it nearly impossible to activate. Even if the code is activated, all you'll get in the final versions is a screen full of garbage; though the prototype does manage to display some text, it's mostly corrupted, which probably means this code was abandoned at a fairly early stage. 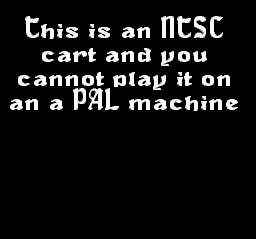 Another completely unreferenced screen code and data exist in all versions for regional locking message, never used nor displayed in any revisions. Weird enough, all these messages do not match the developer's message region text. PAL version claims that this is an NTSC cart, and vice versa. Again, this screen is fully working only in the early prototype version. The release versions only show garbage instead. To see it, in addition to patch for Developer's message, patch ROM at 0x000044 in the prototype version to 0x1F.

There is leftover code and data from older versions of this game used to draw the word "PAUSE" when paused. Working in the prototype version. However, the known prototype version does not have the Cheat mode at all, nor cheat flag assigned to it. So this is a leftover from a version between release and the older prototype where they already added the cheat mode, but still draw the "PAUSE" text on the screen, which replacing with "CHEATER" string if cheat mode activated. In all release versions there is no text on pause at all so both text strings are unused. For NTSC at 0x1D4314:

The first 10 characters of the following string are used to initialize the pseudo random number generator in all revisions of this game. For NTSC at 0x0EEF9F:

For all regions at 0x0F8048. A small copyright string at the beginning of the sound engine code:

Also, every version has a debug leftover text resource before the developer message's text. There is a set of strings with what appears to be display coordinates between. No code ever left even in the prototype version to render this data. It seems that it were used to display the free space in the RAM/SRAM/ROM.