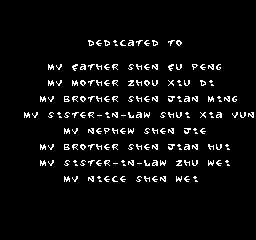 At the game's copyrights and trademarks screen, before the title screen appears quickly press the following buttons the given number of times, in any order: Up 1 time, Right 1 time, Down 9 times, and Left 6 times. Oddly enough, you can scramble the order in which you push the buttons, even making the Down and Left presses non-consecutive, just as long as they're hit the right number of times when you're done. A screen with a dedication to the family of Shen Jian Long (one of the game's programmers) will appear. To exit to the normal game, press Up. 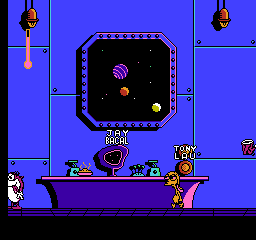 Start a new game and collect the Coils, Socks, and Pies items. You should have 5 of each kind. Next, throw the items until you have 1 coil, 2 socks, and 3 pies. Finally, walk back to the left edge of the level, and while still walking against the edge of the screen, press the "weapon" button. Two developer names, "JAY BACAL" and "TONY LAU", will fall onto the table, both of which can be collected like items. The first one is worth 99 lives, while the second one grants unlimited health.

A similar item can be found in The Simpsons: Bartman Meets Radioactive Man, another Imagineering game.