The Simpsons: Bart vs. the Space Mutants (NES)

The Simpsons: Bart vs. the Space Mutants marks The Simpsons' first foray into the world of home video games. Too bad it's a rather mediocre game. 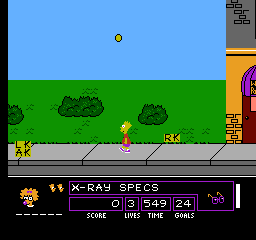 In the first stage, stand on the awning above Tool World's door. From there, jump to the left, and try to position yourself just to the right of the first bush you see. If done correctly, you should land on top of the grass. Press Down to drop down, and the initials "RK" will fall from above. This also changes the enemies on the left into the initials "LK/AK", though they will return to normal if you leave the area.

These may be relatives of Garry and Dan Kitchen, two of the game's designers/programmers, or possibly Jesse Kapili, the game's artist. 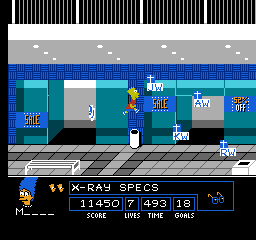 In the second stage, the second trash can on the second floor can be jumped on repeatedly to release a plethora of useful items, including coins, hats, a 1-up, invulnerability, and even more mysterious initials:

These are probably relatives of Henry C. Will IV, one of the game's programmers. Each one is worth one coin. 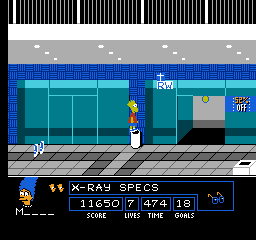 The third trash can also holds the same initials, but they are much more difficult to release here. The trash can acts as an 8-bit shift register; jumping on it while Bart is facing left shifts in a 1, while facing right shifts in a 0. To get the items to appear, you need to successfully enter their associated hex value. Jump on the trash can six times in the order left, right, left, right, left, left (101011), and then two more times to release the corresponding item: 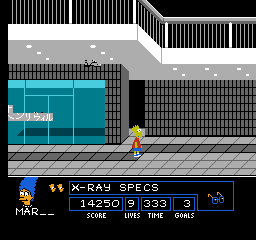 On the same floor, past the third trash can, there is a black gap in the background with an extra life above it and gray shoes to the left. Stand in the gap under the extra life, jump, and quickly press Up, B, Down in mid-air (you can hold the A button while doing this). An item with Henry Will's name written in katakana will drop down to the left:

This can be done as many times as you like, though only two of the items can be on-screen at once. Collecting the item decreases the goal counter, just like hats do. 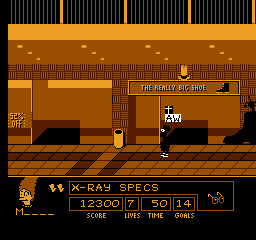 Finally, removing the second stage miniboss's hat while the X-Ray Specs are active will replace the hat with the initials "AW". 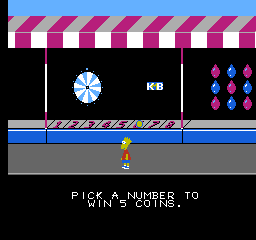 In the third stage, start the Lucky Roulette mini-game. When asked to pick a number, press A (not B!) on the numbers 5, 4, 3, 8, 6, in that order. An item with the initials "KMB" will appear to the right. 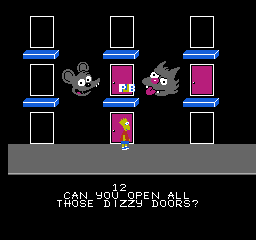 After entering the Fun House, proceed to the Dizzy Doors puzzle. To make these initials appear, you must open a specific sequence of doors before the timer expires. For the purposes of this puzzle, the doors are numbered 1-9; the bottom row is 1-3, the middle row is 4-6, and the top row is 7-9. Open the doors in the order 1, 2, 1, 1, 9, 5, 2, and an item with the initials "PJB" will appear. 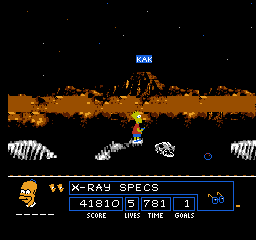 In the tar pit with the dinosaur bones, stand on the edge of the first dinosaur's neck, directly underneath the volcano in the background. Jump 10 times as high as you can, and an item with the initials "KAK" will appear.

These icons can be found among the other used icons for the inventory items of the game HUD. There is no coding or names for these items inside the ROM, only unused item with index $0B has name "ROCKET", has no picture associated with. It's the same as regular Rocket item, but without a Rocket at all. You just fire a match and there is no Rocket to fire.

Bowling or other Ball item.

Probably not intended to be used as Inventory Item Icon, but maybe to select from them. 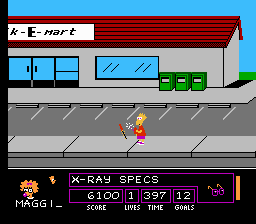 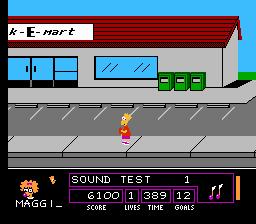 On the first level, shoot the letter "E" of the "Kwik-E-Mart" sign with a rocket. This will reward you with a Krusty head worth three extra lives, and a new Sound Test option! Choose it from your inventory by pressing the Select button, select a sound effect by pressing Up or Down, then press Start to play it.