The Simpsons: Bartman Meets Radioactive Man is another action game based on the Simpsons TV series.

A partial sprite of Larva Girl from the original ending still remains in the final version.

A frame of Dr. Crab with his pinchers closed. 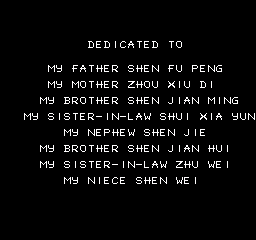 At the Acclaim logo screen, quickly press the following buttons the given number of times, in any order: Up (×1), Right (×1), Down (×9), and Left (×6). These buttons must be entered before the copyright screen appears.

A screen with a dedication to the family of Shen Jian Long (one of the game's programmers) will appear. Pressing Up resumes the normal game. 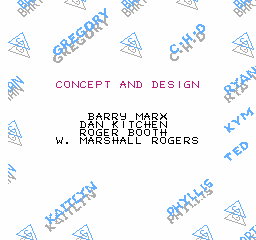 Reset the game, and immediately hold Select on Controller 1 until the credits appear (you can press B to fast-forward through the intro).

Several names will appear in the background. Phyllis is Roger Booth's wife, Kaitlyn is his daughter, and Ryan is his son. 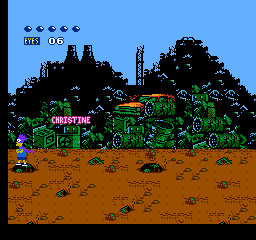 Do the "alternate credits background" cheat as described above. Start a new game, go right to the Claws and grab the "EYES" weapon (lightning icon), then return to the very first screen of the level. Shoot with the eye laser until the ammo counter reaches 6. Go to the right side of the screen, then run to the left as fast as you can (hold A). When you reach the maximum speed, a pinkish item with letters "CHRISTINE" will drop down. Grab it to get 99 lives.

Christine is mentioned in secret messages from the same developers in two other games: The Simpsons: Bart vs. the World and Barbie.