From The Cutting Room Floor
(Redirected from The Sims: Bustin' Out (GameCube))
Jump to navigation Jump to search

The Sims: Bustin' Out starts out with Malcolm Landgraab going around his neighborhood stealing items in return for unpaid rent. The player's objective is to complete each career track, unlock and buy back everyone's possessions, and become rich enough to evict Malcolm from his mansion and move their own Sim in.

Several debugging options left hidden in the game that can be brought back. 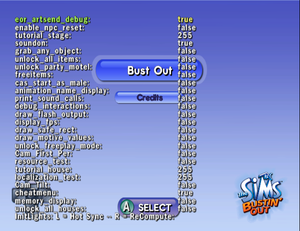 This debug menu is normally visually broken, because the default value that sets the distance between each line is 1.1f, whereas it needs to be a much larger number such as 70f on PS2, Xbox and GCN NTSC, and 80f on GCN PAL in order to render it properly. The debug menu can be opened by pressing SQUARE + TRIANGLE + CIRCLE on PS2 and X + Y + B on GameCube and Xbox, though not all options can be enabled here, such as display_fps because those need to be set to active before the Start screen, whereas this menu can only be brought up after it. 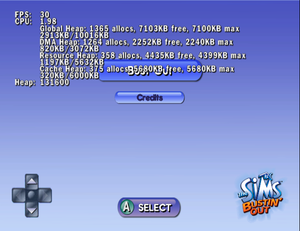 Displays a whole bunch of information on the screen about the performance of the game. The displayed information displays slightly on each platform, but GameCube displays the most. 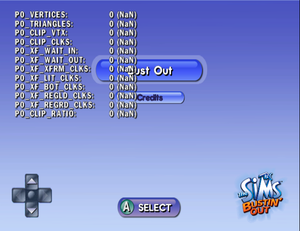 Attempts to list a bunch of rendering information, but the values always remain at 0 (NaN). Just like the debug menu, this display is by default visually broken due to the line spacing being set to 1.1f and needs to be fixed by increasing it to 80f. This is also only present in the GameCube release.

The papergirl or the mail deliverer can't be interacted with, making the icon unseen.

Some files and folders used during development are still present on the disc. These elements give information about early versions of the game.

SystemData/Runtime/ChalData/CHEATS.txt includes some settings, debug options and most likely unavailable options. Two lines (lobby_server = 0 and enable_dnas = 0) indicate either the possibility of an online mode like in the PlayStation 2 version, or just a leftover from said version. Changing the values has no effect on the game.

/SystemData/Runtime/Thumbnails/readme.txt explains how to use the thumbnails folder:

The ALLCHARACTERS.rsp file present in /SystemData/Runtime/ contains an early list of settings for all the characters. In this file, "Mimi", "Mom", "Dudley", "Randy", and "Max" (present in the final version) don't have personal thumbnails and are linked to the "placeholder" image used during development. The file includes some physical options that are likely unused in the final version.

The Thumbnails folder present in /SystemData/Runtime/ contains a lot of unused images for the relationship panel, which show leftover thumbnails for characters from the various modes in the previous game. This folder indicates the presence of 83 characters, but the final game has only 23 story characters.

A file named Tuning.txt in the /SystemData/Runtime/GameData folder contains a huge list of what effects every object, event, and social interaction can have on Sims and the surrounding environment.

This file also appears to have information about unused/unfinished objects and interactions.

An obvious leftover from the previous console entry, when a house is completed fast in Get A Life mode.

Yet another sound leftover from the previous console entry, and still unused too.

Even though there's already a crystal ball to be found in-game, it isn't used. It's also another leftover sound, used when an objective is complete. Unlike the last one that is duplicated, each of them have slight differences in sound.

An remixed version of the dead fish jingle from The Sims 1 that fits in with other sound effects. The original version of that sting is used.

The final game still has some unused effects from objects or social interactions. All of this information came from Tuning.txt (see above).

The Espresso Machine could originally become dirty at one point. (line 467).

All Lamps use the same methods and appear to have unused functions. Originally, the Bulb lamp didn't have the same effect than other lamps.

The Heartbed (The only bed where you can perform the "WooHoo" interaction) has a lot of unused functions.

While not technically unused, it's unlikely if the player will ever see the icon of the Grim Reaper. Using the "Plea" action to revive a Sim that died would show the image of the Sim rather than the Grim Reaper's mugshot. It can be seen if a death has occurred on the lot and when a Sim uses the Talk interaction with another, with the Grim Reaper's head icon being shown in the speech bubble.

The Burglar cannot be interacted with at all on the lot, but the mugshot can be seen if the robbery has occurred and the "Talk" interaction is used.

The Xbox version has unique loading screen backgrounds that can be seen. These textures also exist in the PS2 and GameCube versions, however they are 32×32 in size there.

While driving on a vehicle in Bustin Out mode when you are moving or visiting lots, certain face accessories like shades will have glitched up textures.

In Japan, this game is simply called The Sims (as the last console game was called SimPeople there), compared to other regions that got a unique translated subtitle.

The adult character presets in Create-A-Sim are different in the Japanese, Korean, and Chinese versions, and look more Asian compared to the regular ones. The children, however, only have a slightly different skin tone. They can be recreated in either version without having to unlock any accessories in Bust Out mode.