The fourth and final Sims game on the Game Boy Advance. Also the only Sims game developed by Artificial Mind and Movement. 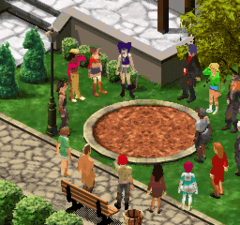 Setting the memory address of the US ROM to x20006C9 to 0E and leaving the area will enter the player-Sim into a small area intended for a scrapped end-of-game cutscene. Baked into the map for this area are all the NPCs (excluding the cashiers and receptionists) circling a dirt patch by the Barkersville Companion Club. On top of this patch would've been a statue of the player-Sim, as the planned dialogue (from address x1DEE884 of the US ROM onward) reveals:

Memory address x200C8B8 of both the US and EU ROMs determines the currently playing soundtrack. It can be changed to 38 different tracks (including 00 for silence), four of which are unused.

Pressing the A + B + Start + Select buttons simultaneously will reset the game back to the "Warning – Health and Safety" screen in both the US and EU ROMs. This feature is not documented in the game's manual.

Appearing a few times across the ROM are references to various debug features. Starting at x1DBE6D4 of both the US and EU ROMs, for example:

Bernhard Wodok is not listed in the credits for the game.

At x3DE5F4 of the US ROM (x3DE984 of the EU ROM) are all the function names and error strings that can be thrown by the Engine:

Composer credits for Martin Schioeler located throughout the middle of the ROM.