In Time Soldiers, you can destroy dinosaurs, Romans, and robots without having to worry about those pesky time paradoxes.

One of the game's dip switches (labeled as "Unused" in MAME) can display some debug information if the game is able to write to address 0x08FFF in the main CPU. This isn't possible to do in the retail game, since that address is occupied by game program code, but was probably possible in development versions. Place this cheat in MAME's timesold.xml cheat file to bypass that check: 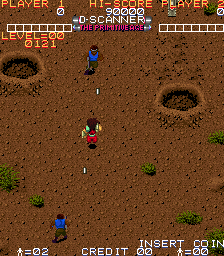 When the debug switch is on, the colors of the score headers will change from white to orange, and two values will be printed to the top-left part of the screen.

The following text starts at address 0x00030 in the audio CPU:

There's an older version of the "Game Over" graphic in the tile graphics ROM. Pretty obvious why they changed it!

While there are sixteen power-up graphics, only five of them are used in the game! While it's hard to tell what most of these would do by graphics alone, the "S Down" is a negative equivalent to the Speed Up orbs, "E" would possibly refill the player's special weapon energy, and "1UP" is just obvious.

The kanji on this unused power-up (the only one without any kind of animation) is 敵, or "enemy".

One of two blocks of Japanese text in the object graphics ROM. "しゅりんく " is a transliteration of "shrink" using hiragana characters for transliteration instead of the more commonly used katakana system.

The Japanese version, Battle Field, in addition to having a different logo, uses blue text rather than red on the title screen. The SNK logo is also a darker shade of blue than it is in Time Soldiers.

Note that even though both versions have a language dip switch, the graphics for each game logo are exclusive to that particular region. This means that if the language dip switch is set to a different region than the game is from, the title screen will be horribly glitched and mistiled.