Transforming into a blue-eyed monkey that spits energy projectiles might seem like a good idea to some people, but not Toki.

Address 0x00489 in the ROM holds a byte that's used as a debug flag. It's set to 00 in all versions, but if the following code is put in MAME's toki.xml cheat file, it'll change to 0F: 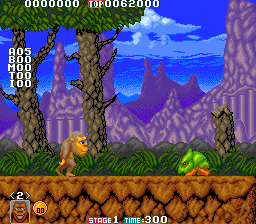 This enables four different debug features, each one controlled by a different bit in the debug flag: 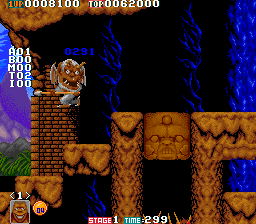 There's a flag in the main CPU (stored at 0x02B78 in the toki set) that would have enabled an object viewer if set to a non-zero value, but it's set to zero in each set. Place the following code in MAME's toki.xml cheat file to re-enable the object viewer:

Press 1P Button 1 to increment and 1P Button 2 to decrement the current frame value. Valid values are 0000 to 08DF.

It's highly advised to use this code in conjuction with the debug mode code, since the object viewer will not disable the invincible flying skulls, give the player invincibility, or disable the timer.

Another debug function controlled by a ROM-based flag (0x1A026 in toki) is a partially functional demo recorder. Place the following code in toki.xml:

The player will now be able to move around freely in demos until time runs out (Demos run for 512 frames) or until the player dies. The game tries to write the player's input to the ROM each frame, but since it's Read-only Memory, you can imagine how successful it is at doing that.

Toki does a little victory animation after clearing a stage. There's only one seen in the final game...

All of these graphics have assigned frame IDs and are visible with the in-game object viewer.

Frame IDs: 11A-120
This simple alligator / crocodile was likely the first enemy designed, as it's the first one by ID and the first one seen in the sprite graphics ROM. Doesn't seem like it would do much except lumber around. Good candidate for the Dark Jungle stage.

When defeated, they would have burst open like snake-shaped balloons.

Frame IDs: 246-249, 24E-253, 256-257
The Blastums enemies appear throughout the game, but they're always placed so that they fly out horizontally. These vertically-positioned variants are never used.

Frame ID: 812
A larger version of the stone carving that blocks the way to a helmet power-up in the Labyrinth of Caves.

Frame IDs: 81E-81F
The 16t weights are normally black, but there's an unused pink variant in the game data. These would fit with the pink see-saw platforms seen in the Dark Jungle.

Frame IDs: 85B-860
The frozen platforms seen in the Ice Palace have three frames of animation, but only the second frame is used in the final game. There's also a longer version of the platform that's entirely unused.

Frame IDs: 88C-88E
A window with moving chains that should appear near the spike platforms and windowed gears seen in the Golden Palace. Probably cut due to a lack of screen space.

Frame IDs: 8A3-8A5
This ball of fire, though, only has an appropriate palette in the Caverns of Fire. Makes sense if you think about it.

An alternate design for Toki appears at the very start of the object graphics ROM. This design has a slightly different forehead, no eyes, and an angrier expression.

This alternate design takes up a significant amount of ROM space, so it's no clear why they left all of it in.

One possible theory, based on a difference in the game's attract mode (seen below) is that the unused design would have been used in the Japanese version of the game.

The alternate version's climbing animation only has four frames of animation, with two frames being repeated to make up a six frame sequence. The newer design has six unique frames.

Toki's animation where he jumps off of a swinging rope has four frames of animation in the eyeless design. The final design repeats the first two frames twice; it looks awkward but it works.

The alternate design even has proper victory animations! Actually, the eyeless design is what's stored first in the ROM, and then the eyes for the final design appear immediately after.

The designs sans goggles doesn't have a shooting animation, while the flipper-wearing variant does.

This eating animation only appears in the older Toki's sprites; it's replaced by one of Zorzamoth's tusks in the final set.

Even the HUD icon has graphics for the alternate design!

Starting at 0x07C0 in the sprite graphics ROM are graphics for what seems to be a completely different game. The first of these is the world's most generic font.

Next up are a set of hands for rock-paper-scissors, success, failure, and tie symbols, arrows, and a balloon.

These graphics could have been used in the Dark Jungle, which starts out rainy and clears up as you get further into the stage, but were probably meant for some other game.

The hearts that appear in the game's ending use a solid pink palette in the final game, but they actually have a good deal of shading in the sprite graphics ROM.

Immediately after the spinning hearts are a full set of card suits!

A multi-directional missile that would have homed in on the player. Maybe a little too technologically advanced for this game.

Big fruits that would have presumably given the player large point bonuses.

A strange sleeping frog that looks like it's coming out of a wall or something? Weird.

Spinning centipede wheels appear in the Dark Jungle. There are two unused designs for the wheel: A spiky caterpillar and a more harmless-looking worm.

More spinning objects: A jellyfish, a shrimp, and two spike balls. The fourth frame of the shrimp roll has two missing tiles.

There are keys that appear throughout the game, but they're 16x16 and just fall to the ground. These key graphics look like they would have actually stuck into something... 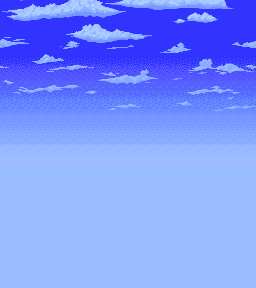 The Stage 2 background seems simple enough; just a layer of clouds, most of which aren't visible because of the long water section near the start of the stage... 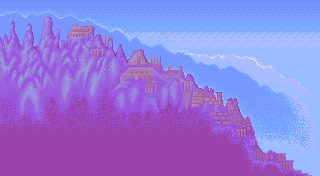 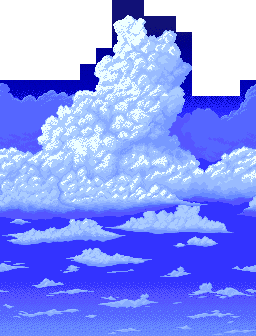 ...but the background in the ROM is actually much larger! It consists of two parts: A lower section that includes purple mountains and a ruined city, and an upper section with large, puffy clouds. 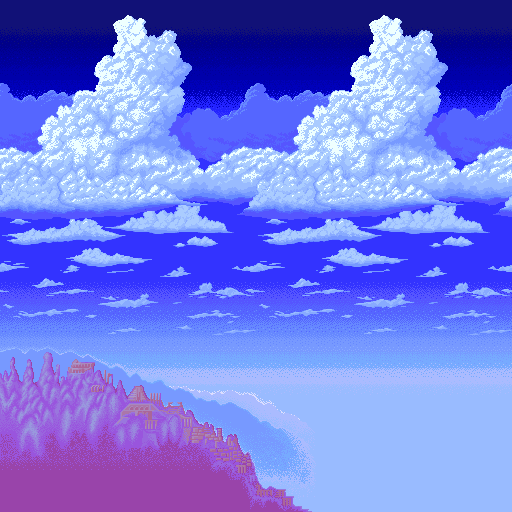 This is a mock-up of how the two pieces would look combined. 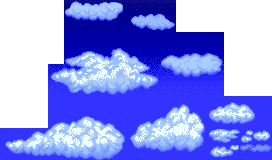 There are also individual cloud, moon, and star tiles that would have been placed sporadically in the background.

Stone faces meant to appear in Stage 2, both in the water and in the caves.

These sprite-based blocks would have appeared somewhere in the Caverns of Fire, doing block things...

...while this tile-based block just has a little guy in it. A blockman.

This intimidating stone head would have shown up near the end of Stage 3.

There's a swimming section in the ice palace that has a mostly blank floor, but apparently this two-headed rock formation was meant to appear down there at some point. Maybe it's for the best that it wasn't.

The design of the monkey in the game intro is different depending on the game's region. In JuJu no Densetsu, the player is transformed into a scowling, eyeless monkey, while in all other regions, the standard design is used.