Tomba! tells the tale of a pink-haired feral kid who loses his grandpa's bracelet to some evil pigs. In a bid to retrieve it, Tomba soon learns more about the history of the Koma pigs, and just what he's up against.

Not only is it a very rare and expensive game to find physically, it's also littered with unused stuff and regional changes. 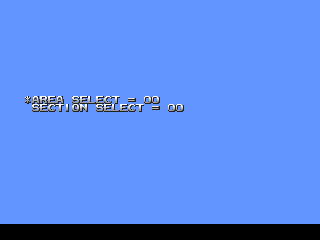 Applying the below code then pressing L3 while in a stage will enable this screen. You will need a second controller plugged in to operate the menu.

This cutscene shows the Iron Castle area being freed from the Evil Pigs, yet this area is never accessible in the game nor is there a pig to break the spell for it. This hints that the Iron Castle might have been a far bigger area than it is in the final version.

There are quite a few unused items in the game's code. Most of them have a placeholder description.

) also exists, and is used for items that don't exist.

Interestingly enough, the unused variant of Biting Plant Flower looks like a flower that bloomed. Forbidden Mushroom's icon looks like the mushroom you get from the event "Red+Blue=?"; using it has no apparent effect. Grandpa's Bracelet is an item you collect only at the end, so you can't see it in your inventory, suggesting that originally you could continue playing even after finishing the main quest.

One of the NPCs mentions seeking a way to make it "rain" inside the Lava Caves. In fact, this matches up with the Rain Essence item more than you'd expect—because you can use the item in there. 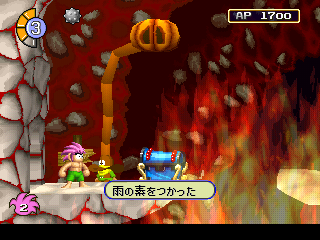 Unfortunately, whilst the game is programmed to let you use that item at that specific location, it doesn't actually do anything.

Village of All Beginnings

An early sprite of Yan which resembles his appearance in the PrePre demo is loaded in the VRAM for the Village of All Beginnings. It's loaded in the same area as it is in the prototype, but the palette no longer works due to Yan's updated graphics and palettes. The palette used here comes from the prototype.

There is an older variant of the "Pipe" (wrongly translated from "Valve") item in the VRAM of Baccus Pier (though it does get spawned in, just outside of the map).

This item can also be seen in an old VHS trailer for the game, appearing around 4:26 on the left side of the map. If one looks closely at the containers located in Baccus Pier, it looks like one of them is missing a valve; this would indicate that the player was supposed to put the valve back on top of the container, instead of installing it as a pipe. 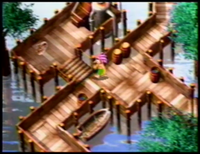 A small variant of the Leaf Butterflies; it is never seen in-game and only consists of one sprite.

An idle animation for a Leaf Butterfly; in-game they're always flying, so this goes unused.

There's a small village that can be seen on the main map, just past the Tree of Knowledge. Unfortunately, you never go to this location, nor is there a name for it.

However, if the camera is forced to move whilst visiting the Tree of Knowledge, an unused area, presumably the village, can be found. This includes a shield above the entry door (which has no collision and is not seen elsewhere in the game), some Funga drums, torches, and a large pedestal. Graphics for a tribe chief and a Funga drum are both loaded into VRAM, but not used.

With the discovery of the unused Funga items, it's likely there was going to be another quest in this area, which would see Tomba gathering the materials.

Among the sprites for this area is an unused character; he looks like the chief of the Masakari tribe, and unused dialogue points at him playing a big part in the story. He would have given the player a few quests to find his spear and to create a Funga drum. 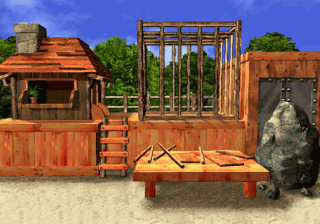 The full background for the Lumberjack Factory shows a large boulder in front of the iron door. In the final, the door is already open (having appeared to have been hit by an explosion) and the boulder is nowhere to be found. The actual opening to the area is overlaid on this background, so it's never seen by the player. 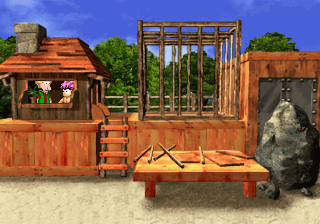 A mockup of how it would look if the mask were to be applied.

In the Japanese version of the game, the guy who gives you the Monster Hunter event doesn't move at all, but despite this, he has graphics for talking to Tomba. They were fixed up in the international release, so these particular sprites go completely unused. He also has an unused walking animation.

Both NPCs in this area have unused animations relating to building things; one uses a hammer and the other uses a Ryoba.

Unused text implies that the player was able to craft certain items.

A pufferfish-type enemy, with swimming and turning animations; it also has a hurt sprite.

Scattered throughout the game are strange stone murals/tablets in the walls. Although you cannot interact with them in the final game, a demo allowed you to do so. It's unknown what they were going to be used for, and some cannot be seen during regular gameplay. The one below can be found in the VRAM for Masakari Jungle, but only in the Japanese version. The international release replaces it with more flowers.

Some unused text points towards there being a total of six slabs:

There are names for every area in the game. Some of these areas, however, will crash the game upon entry.

As seen in a video above, Iron Castle was originally going to be a much larger, playable area in the game. Along with the video are unused graphics, suggesting that it was cut late in development.

Another thing to note is that the internal name for the Flower Tower level is Outer Walls of Pig Island, with the area being called Pig Island. In the Japanese version of the game, Pig Island can be seen on the map, suggesting another late removal.

The only playable full area that goes completely unused can be accessed on a US copy of the game by changing the values at 009E811C and 009E811E to 15 and 02 (or 03) respectively. The levels are pure black, but have some collision. No level name is given, but it shows on the map as being somewhere in the Village of All Beginnings.

Exclusive to the Japanese version, there are three "body types" for Tomba found with the rest of the status icons. The international versions only include the regular size body in the VRAM. It's unknown how this would have affected gameplay, though since they appear right next to the facial icons, it may have worked in a similar manner to the Cry/Laugh status types (with Tomba only being able to complete certain missions with a certain type).

Even though the American version does not have these sprites, it does have these two strings of text, Fat and Thin.

In both the Japanese and US versions, there's a dwarf who guards the Dwarf Elder. The dwarf beneath blocks Tomba from interacting with him, and only moves after the Dwarf Language has been obtained. Despite this, garbled "Dwarf-speak" still exists for the upper dwarf, but it can only be heard if Tomba is hacked over there. The dwarf at the very top speaks normally, regardless of whether or not you have the language.