Tomba! 2: The Evil Swine Return sees the pink haired feral kid return, this time in 3D! But it still works like the original game, in that you can only move left and right unless there's another path to choose from.

In the game, items with pink text are used automatically. Items with green text are equippable. Although both equippable, (empty) and the blank item reuse the last apparel and weapon appearances respectively, but do nothing themselves.

A fourth, unused fruit can be found in the game's files. It appears slightly darker than the neutral fruit and has a seemingly angry expression. 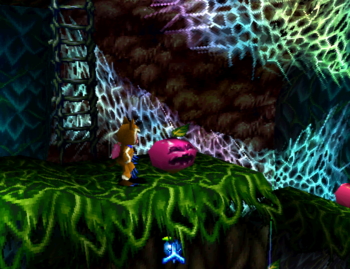 Several unused status icons can be found in the game's files.

The Japanese demo of Tomba! 2 contains an item called "Nishiki Birds' Gondola" that uses the same item slot that would be used for the "Nishiki's Wings" item in retail versions. However it lacks textures and an item icon.
It is safe to assume that the Gondola would have been used during the "With the Nishiki Bird" event, but was replaced with the Nishiki's Wings item at some point in development.

In retail versions, the textures for the Gondola are loaded in the VRAM when in the Town of the Fishermen and the Water Temple, the same areas where the Nishiki's Wings make an appearance.