Multiple references to Spider-Man, who was featured in the previous game. Found in "\data\anims\skater_m":

One can skate in the SkateShop area by moving the folder "Ware" in \Data\Levels\ to another location, making a copy of the "SkateShop" folder and renaming it "Ware", renaming all the files inside to "Ware" rather than "SkateShop", and finally copying burn.qb from Levels\Burn and renaming it "Ware.qb". It is a small area, with one wall opening to blackness. 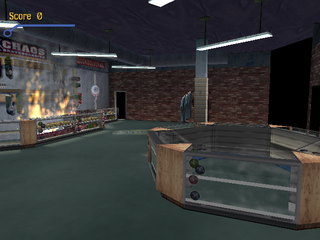 Found in \Data\Streams\SkateShop, they are all unused dialog of the SkateShop "Rasta Guy".

There are files for a debug menu in-game. They are brought back to functionality with the THPS3 1.3 Mod. It allows swapping of Sky textures, changing fog, loading scripts, and loading levels. One can either tweak game files, or use a mod such as THPS3 1.3 to make the menu usable. 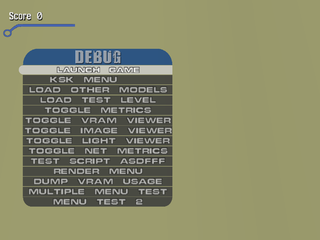 By pressing the "Change Camera" button (which is by default the tilde key), and jumping at the same time, it will freeze the player and gives the player control of the camera. Holding Ctrl and using the arrow keys will pan the camera around, holding Shift and using the arrow keys will rotate the camera. It can be used to take screenshots, but it was most likely a forgotten debug feature. Screenshots on this page not featuring the player were made using the debug camera. Activating the debug camera while doing tricks can be used to gain massive amounts of points, and would lead to a ban if abused online.

A song that's an unplayable version of "gangsta", the main menu themeː

There exists 2 extra copies of each of Doomguy's boards; identical in appearance. They were literally copied and have the file-names similar to "Copy (2) of DoomB0#.png".
However, there's a file named "DickG01 copy.png" that is NOT identical to the original DickG01.png and it has a blue tint.

There also is a leftover "DoomB01b.psd" and two more copies.

There are also quite a few images from earlier builds, pictures of staff, and other images used for testing. They are found in \Data\images\. There is also a set of sprites for PlayStation button controls found in \FrontEndControls; examples of these sprites are shown in "menu_layout10.4.png" below.