Top Gun: The Second Mission is the sequel to the original Top Gun NES game by Konami. It features improved graphics, the ability to roll your plane, and a one-on-one dogfight mode you can play against the computer or a friend. 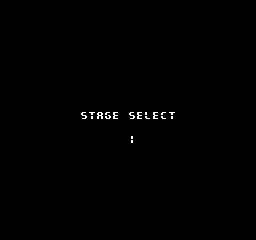 Hold A or B and press Start on controller 1 to get invulnerability or stage select, respectively. Holding both, as you may expect, gets you both. 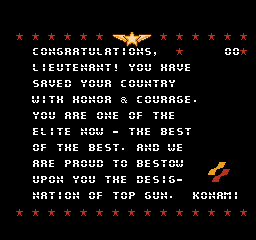 In addition to the above effects, the European version adds another – hold A on controller 2 and press Start on controller 1 to change the Game Over screen to the Congratulations screen.

The screen appears normally in-game instead of the Game Over screen when you score at least 50,000 points.

Also exclusive to the European version – after enabling the Game Genie code ZLETETLG, press A + B + Start on controller 1 to see the ending.

At the end of the ROM is an ID with the date that version of the game was compiled. A similar ID is found in many other Konami games, with some variations.

The subtitle in the Japanese version, which was changed to Dual Fighters, was lowered and given a new design.

A single pixel was removed from the face mask of this pilot in the intro. Can you spot it?

The portrait of Stalin Fortimesky, enemy pilot for Round 6 of the 1P VS Game, has slightly different shading in the international release. Yes, that's actually his name.