Shoot the Bullet is the 9.5th game in the Touhou Project series. This time, Aya takes the pictures of the Touhou 6-9 cast shooting out their danmaku patterns (hence the subtitle) for her newspaper.

In the photo2.png file, there's three unused photo messages that are not displayed at all. 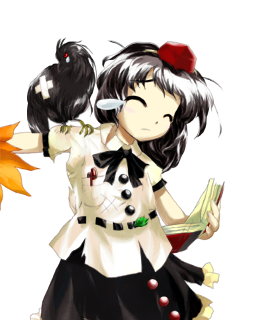 An unused frame of Remilia flying.

Flandre has an unused bat form that isn't used anywhere in the game. They're not used by Remilia, either.

Unused alternate frames of Youmu attacking with her covered arms.

Appears to be a sprite of Ran "blessing".

Yukari doesn't move at all in her spellcards, making her moving sprites unused.

Frame sprites of Tewi attacking downwards. She never does this in her attacks.

Unused sprite frames of Eirin raising her hand with bow in her hands.