A platformer video game based on the same film. Compared to the other ports of this game, it was very cheap and rushed in comparison.

The credits theme for the other versions that was meant to be used in this version. It was replaced with a rendition of Andy's Room stage theme.

The level clear jingle heard in the other versions that was meant to be used.

The jingle that plays on the game over screen on other versions does not play in this version. 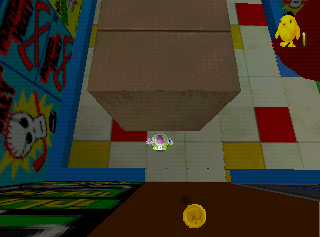 In Al's Toy Barn, near where a box can be pushed against a wall full of boxed tennis rackets, an unobtainable coin exists behind one of the racket boxes.

In the original release, the gunslinger enemies that first appear in Al's Penthouse resemble a stereotypical Mexican. They were changed into blond cowboys in the 1.1 version.

The level end screen in the European version includes sprites for the tasks required to collect each Pizza Planet Token. These would later be included in the v1.1 release of the American version.

In the French and German versions, the Buzz Lightyear logo is missing from the main menu.