A bit of text at 1C630 in the executable. Also goes unused in the demo version of the game.

What appears to be an early version of the end credits music, possibly the original full version of the 30-second title screen tune. The used version is a remixed version of the same tune, but incorporating bits of the stage themes throughout the game into it.

An unused variation on the victory fanfare; the used version omits the short intro.

A single voice line for Woody losing, simply never played for some reason.

There's an out-of-bounds chair in the Andy's House level. It can't be seen in normal gameplay without tools or hacks. 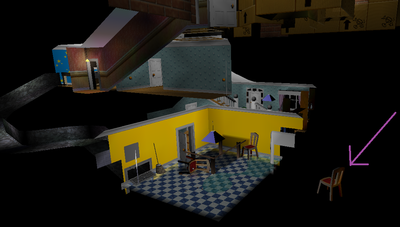 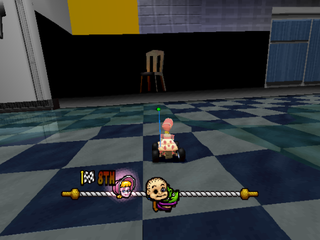 Wait for the demo to start, skip back to the title screen and enter Circle, Triangle, Circle, Square, X, Square, X, Triangle, Triangle, X, Square, Circle; if done correctly, you'll hear a sound. This unlocks the ability to go to any unbeaten challenge and press Square to have it completed. The button combination is revealed in the US version after finishing all the challenges, but was removed entirely from the European releases.

In addition to the cheat code being removed, one challenge for Lenny takes place on a different track between regions: "Yard Hide And Seek" takes place on Sid's Yard in the American version and on Sid's Attic in the European version.