Take the formula of TrackMania Nations, spiffy up TrackMania 2's engine, and put a lot of the content behind a paywall. That's the new Trackmania in a nutshell. 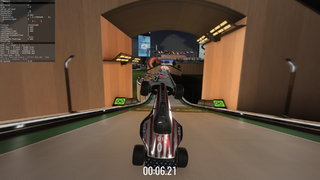 As with TrackMania Nations Forever and TrackMania 2 before it, pressing the -/_ (Minus/Underscore) key during gameplay will bring up some stats about the game. There are some additional statistics compared to TrackMania 2, like an in-game timer and local smoothness.

Likewise, there are further debugging options that can be accessed by holding Ctrl with one of the following keys:

Various leftovers from ManiaPlanet, the launcher for TrackMania 2 and Shootmania, can be found inside the executable.