Trauma Center: Second Opinion is the remake of the DS game Trauma Center: Under the Knife and was one of the Wii's launch titles in Japan and the USA. It's also one of the wildest takes on surgery to date.

A few unused sprites can be found remaining in the sprite/bustup directory. 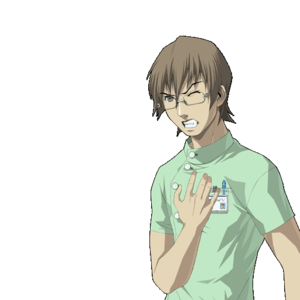 chr01_09 is a sprite of Derek in his Hope Hospital uniform and pose from the end of the third episode of the sixth chapter. While it's unfinished, it's not a placeholder either, possibly indicating the sprite was scrapped fairly late in development. Where it'd have been used is unclear. 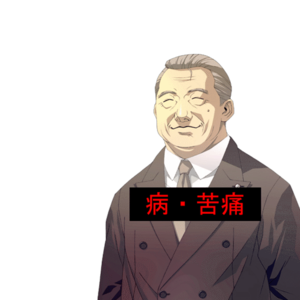 chr12_05 is a placeholder sprite for Secretary Anderson. The kanji overlayed on top of the sprite, "病・苦痛" roughly translates to "ill, in agony". Would have it been made and according to this text, this portrait would have most likely appeared towards the end of Chapter 3. 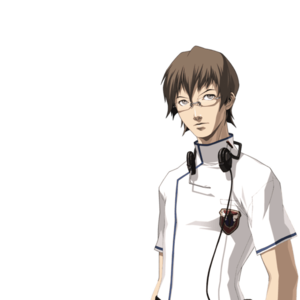 Another unused sprite for Derek. Its internal name, i_bust_00_00_00-0, implies it's the first sprite to have been put into the game, as it differs from the naming conventions used by every other sprite found in the game's data (which is "chr(X)_0X_X"). The design is much more reminscent of Derek's from Under the Knife. This sprite is seen in an early trailer for the game.

Sprites of Yukari Takeba and Aigis from Persona 3 are present alongside the ones for the Second Opinion characters. Judging from the filenames being similar to the second unused sprite of Derek, these were likely used as placeholders at the beginning of development (since the Trauma Center and Persona series were both created by Atlus, and Second Opinion and Persona 3 were probably being developed around the same time as each other).

Under the Knife Title Theme

While most of the files found in the bgm subfolder are used as the game's music, one of the tracks found there, BGM_000.brstm, can't be accessed in-game and, as such, goes unused. It's a remaster of the title screen theme from Trauma Center: Under the Knife and, unlike the tracks played in-game, isn't looped. Due to its name and unlooped nature, it can be assumed to be a placeholder.

test.brstm is a simple drum loop.