Ultima IV is arguably the first "true" Ultima, starting the Britannia continuity that would last for the rest of the series. It's unique among RPGs in that there is no major villain who you spend the entire game building up to defeat - your ultimate goal is basically to be a really good role model. 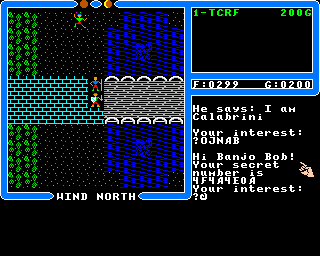 Saying "OJNAB" to any townsperson results in the phrase "Hi Banjo Bob! Your secret number is 4F4A4E0A". As usual with the talk command, only the first four letters are technically needed.

This is a reference to "Banjo" Bob Hardy, who ported the game to the Amiga. 4F4A4E0A spells "OJN" followed by a newline, but it is unclear whether this is simply another reference or a code.

Dungeon Hythloth is reached from either Lord British's Castle or from one of the connecting Altar Rooms. The party then needs to proceed through the bottom of the dungeon to reach the top in order to get an airship. Despite a major bug that prevents properly going through level 6, there are still two spells that allow the player to reasonably finish the dungeon. The Hythloth bug also exists on most computer ports of the game, and is not exclusive to the Amiga. 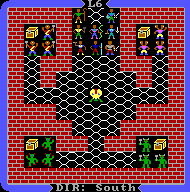 Players ascending the dungeon normally see this Eastern room. It's a dead end even though peering at a gem implies that it connects to the room to the left. 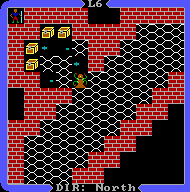 Players that bypass the level and double back will enter this western room, only to be plopped in the north-west corner. The possible exits in this room place you in a wall, which thankfully don't put you in the wrong place. In the room itself, those chests are mimics, and thus their element of surprise goes unused as well. 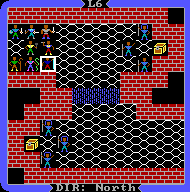 Because of the problems in the above two rooms, this room will never get visited, barring a user-made patch. 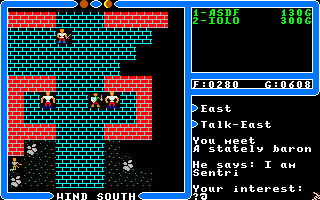 In Serpent's Hold, there are two guards at the gate. Speaking to them cause them to identify themselves as Sentri, which is the wrong dialog.

The correct dialog is as follows:

This is caused by MAPD.LWZ assigning dialog entry 01 to the two guards (file offset 4fc), instead of 02.

Some characters don't have full dialog, and associated fields are simply filled with A.

This placeholder can be revealed in-game. For example, Barren of Skara Brae (among a few other characters) respond to the player inputting A, and respond with A instead of the default response.

While questions also have the placeholder (along with the yes/no replies), there's no trick to expose them.