Ultimate Custom Night is what happens if you take the Custom Night mode from the older Five Nights at Freddy's games and add in zany humor, a Nintendo Hard difficulty, and no lore details.

The game breaks every rule in the series, but given that this may be the last entry, it's nice that the series went all-out and did something really fun.

Originally meant to be an update for Freddy Fazbear's Pizzeria Simulator, it was instead released as a standalone game.

Whenever Balloon Boy and JJ show up in the vent, only their faces are seen. You can probably see why by just looking at the sprites themselves.

Like in Five Nights at Freddy's 2, JJ appears under the desk when she gets in the office. This time, her mouth can be partially seen. 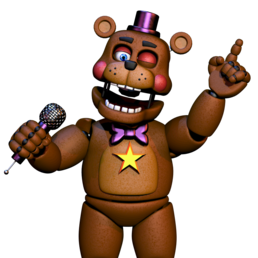 This graphic of Rockstar Freddy shows up when you first boot up the game and when you earn a power-up, but his legs are hidden beneath the screen. 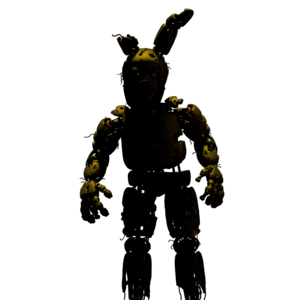 This graphic appears in the third office, but it's placed behind the office image (which has most black parts transparent, allowing this graphic to be seen through it). The silhouette is also unseen due to it being placed on top of a black background.

Just like the Springtrap graphic above, this graphic is used, but the silhouette is unseen due to it being placed on a black background. 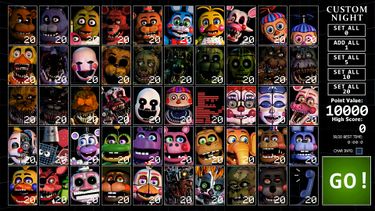 Present in the files and intended for the menu, but was removed in favor of the Offices, Power-Ups, and Challenges buttons. Strangely enough, the menu image on Steam and Gamejolt is an older version with this graphic present (seen at right).

An unused animation of Bonnet falling down, recycled from Five Nights at Freddy's: Sister Location. The object for Bonnet that hosts this animation is likely reused from that game, as Clickteam objects can be easily recycled. Bonnet has no falling animation that uses the bright lighting in this game, and instead just moves down when her nose is clicked.

An image left over from the demo version that Scott Cawthon sent to YouTubers. This would appear in the middle of the main menu if there was an attempt to start a Night with more than 2,000 points.

When you trigger the secret with Old Man Consequences where you end up in the "Fourth Layer" area from FNAF World, the game registers a save file called "info" and adds in a value called "beatgame4=1". This save file has no purpose in Ultimate Custom Night, but FNAF World can read it, causing a trophy of Freddy to appear on the file select screen.

The reason this happens is because the frame used for this Easter egg is recycled in this game, and the code to have the game to execute the data was left intact.

When the game first came out, both Toy Chica's and Rockstar Chica's bibs were flipped in the wrong direction. This was later fixed.