Unicycle! is a fast-action line-riding game for up to four simultaneous players, memorable for its bouncy soundtrack and acid-trip bonus stages.

...and ends up re-enacting the Monty Python bit where the subtitlers get fired.

As promised in the TEXT message, Ctrl + Start Game will let you choose a starting level from 1 to 199.

There's a special message if you try to go beyond that... 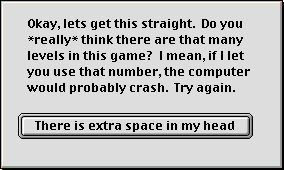 ...and still another to handle non-numeric input.

Again as described, enter music into the Practice dialog to bring up this soundboard. 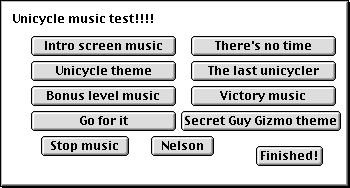 The last song is apparently exclusive to the sound test. It's theme music for Guy Gizmo, a gadgeteer character created by the author.

Clicking "Nelson" cuts off the music with the "Haw, haw!" that signals an in-game wipeout.

If sound effects are turned off, "Nelson" just stops the music, and if music is turned off, you're locked out of the sound test altogether.