Unreal Tournament is Unreal with a focus on multiplayer and a lot of mods and custom levels.

EVERYTHING from the original Unreal is included in UT, except for the maps and music. Code, monsters, sounds, weapons, models... all present, accounted for, and fully operational. This seems to be a holdover of UT originally being developed as an Unreal expansion pack, and kept as an easy way to provide backwards compatibility with old DM maps and mods, a resource for mod makers, and due to Epic being lazy and reusing the same engine.

A very early UDamage icon can be found in botpack.u. The icon is shaped like the HUD icons in Unreal. The UDamage itself is interesting, as it uses a texture not seen in the final game. Instead of being gold, the center of the UDamage is red, while the rim of it is a brown-ish stone texture. This icon, along with the UDamage design, can be found in Botpack220, making it a very early leftover.

An early Antigrav Boots HUD icon can also be found in botpack.u. The icon uses Unreal 's Jump Boot icon, but has a blue background instead of Unreal's dark stone texture as a background. It can be found in Botpack220's files.

Icons for green and gold team flags are in botpack.u. These seem to suggest that there was supposed to be green and gold teams available in CTF at one point. Like the previous HUD textures, these can be found in Botpack220's files. However, as of Version 222, which is a fairly early prototype, there isn't any support for this. This suggests that the green and gold team in CTF were scrapped early and nobody bothered to remove the icons.

Tiny red and blue dots are found in botpack.u. In the Version 222 prototype and some pre-release videos, these icons are used to designate who is holding the flag on the scoreboard in CTF.

A collection of various HUD mugshots with transparency instead of a black background can be found in Faces.utx. The package only has mugshots for Xan, the necris, the Blood Reavers, and the Dark Phalanx, suggesting it was made before the final roster was completed.

If the player is using a skin that does not have a mugshot defined, the game will use a black and white picture of CliffyB, one of the game's designers, as a placeholder. This picture is also used in an easter egg in DM-Codex. 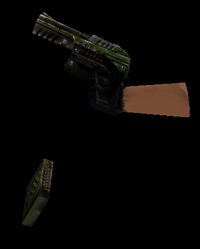 A reload animation for the Enforcer can be found in its model file. In the Version 222 prototype, the Enforcer has to be reloaded after 20 shots are fired.

An early razor blade fired by the Ripper can be found on one of the Ripper's textures. This blade looks a lot like a giant CD. It doesn't look very cool, which is likely why it was removed and replaced with the blade seen in the final game.

An early video shows the Ripper with the old razor blade.

Past DOM-Bullet's boundaries are a small piece of the map that isn't connected to the rest of the map. It consists of two very small rooms with light fixtures on the wall that have a metal shaped-beam bridging the gap between the two rooms. What this was supposed to be for is unknown.

Past the Middle control point is a strange 3D shape that looks vaguely like a tornado. It doesn't use any of the textures seen in DOM-Olden and doesn't appear to have any purpose. Even stranger is that the mystery shape does not appear in the DOM-Olden found in the Version 222 prototype, so it was added between March and November, when the game was officially released.

A few music tracks that aren't used in any official map for the PC release exist in the game's files.

Several unused patterns also exist within the songs. Below are the most interesting of these.

Unused patterns that create a significantly extended version of the song.

Unused patterns from an early version of the intro theme.

Some of these voice-overs are used in Version 222.

The files contain another version of the AS-Hispeed voice-over called "motiveTrain". This one has a slightly softer voice tone from the same voice actor and is worded differently.

One thing to note is that the briefing mentions destroying unspecified equipment and the control room. In AS-Overlord, the attacking team just needs to shoot the control room's panels to win.

At one point, characters were supposed to be assigned callsigns based on the Joint Army/Navy Phonetic Alphabet used by the US military until 1955. These would be used to mention someone by voice when a command was given. For example, if the player tells Archon the bot, whose callsign is "Baker", to defend the base, the human player would automatically say "Baker, defend the base" after selecting the command. These were scrapped before the final game was released, but the sound effects are still in each character's voice package. In the final game, no name is mentioned when a player issues a command.

Callsigns are used in the Version 222 prototype.

Three unused taunts can be found in the game's files; two from the Male1 soundpack, and one from Xan Kriegor's soundpack. There doesn't seem to be any specific reason why the Male1 sounds were cut, but Xan's might've been cut because it doesn't fit his character.

Several unused announcer sound effects are buried in the announcer's voice pack. The unused clips appear to be a mix of announcing regular events in a match (like reaching first place in a match), single-player specific sounds, and an unused killing spree announcement. The most interesting sound clips are ones hinting at mechanics that do not exist in the final game, like an assist system.

CaptureSound.wav is an unused sound meant to play when the flag was captured in CTF. It is a brief guitar riff. This sound file can be found in Botpack220 and is used in the Version 222 prototype.

Two unused sounds can be found in the Domination section botpack.u. The sounds appear in Version 222 and are unused.

Deathc52.wav is an unused death sound for the male player models. This sound is used in the Version 322 demo, but is not played in the latest demo and the final game.

The Blue base uses darker textures. V222 reveals that these are from the Crypt2 texture package.

The Blue base has different textures and the ground texture is darker and rockier-looking.

The red lights are less vivid than they are in the final version of the map.

The left path in the crate room has two metal slopes on its sides. A small bit of the skybox can be seen on the far left, which shows the sky as a blue-wavey pattern instead of outer space.

The Gargoyle control point is in front of the door that leads to the teleport exit, not to its left.

The right doorway does not have a walkway that connects it to the upper part of the engine room and the door uses a door texture from Unreal's mine texture set.

The room leading to the Storage control point has tan bricks instead of grey bricks.

The package "faces.utx" contains an unused mugshot of Xan that calls him "Bane" instead of Xan.

Code for an unused Minigun Arena mutator exists in botpack.u. 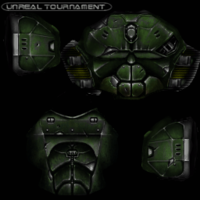 The Armor's texture sheet has "Unreal Tournament" written in the margins.

There is an easter egg in DM-Codex featuring CliffyB, one of the designers behind UT99. In order to access it, go into the room with the four paths meeting at one point. Look for the stairway that has a rocket pack to its right. Go up the stairs and look for the small glass shapes on each side of the wall. Shoot them, then go into the center room with lava at the bottom. Go to the path that has an elevator on the right. Past the elevator is an opening that leads to a small room with CliffyB's face and “Pretty fly...” underneath him. Staying in the room will constantly damage the player. Shooting the “Pretty fly...” will turn it into “(for a white guy!)”. Shooting the text again will revert it back to “Pretty fly...”. 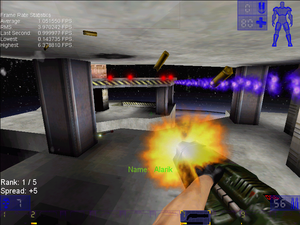 Unreal Tournament, like most Unreal Engine 1 games, uses a plugin system for its renderer, so as to allow more flexible support for multiple video card types. Interestingly enough, the PowerVR SGL plugin, while dummied out, is present, compiled for Unreal Tournament, and works fine with minor bugs on versions of the game before the v428 patch (the skeletal animation support breaks it). Of course, you actually need to HAVE a PowerVR card to use it, and you'll need to have Kernelex 4.5.1 installed and the game set to Windows 98SE compatibility mode.

The Dreamcast version of the game (including the prototype) has additional instrumentation in the song "Go Down", as well as a section of "Organic" that sounds different, as illustrated in the following videos. While it was initially speculated that the Dreamcast songs might sound this way due to having the original quadraphonic channels on the tracker files downmixed to stereo (whereas on the PC, the additional channels won't play), but use of OpenMPT to analyze Go Down (by saving a quadraphonic file) shows that the additional channels do not contain the Dreamcast instrumentation. It's possible that Alexander Brandon may have provided a different version of the song to be used for the game instead.