From The Cutting Room Floor
< User:Iggy
Jump to navigation Jump to search 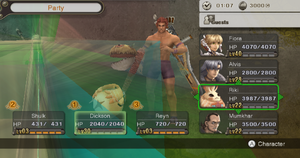 This is the drop table for the unused enemy Hitter Bunnit.

This drop table is only referenced by the unused enemy Antol King.

The High Entia assassins that attack the party in Whitewing Palace all have drop tables with a guaranteed chance of dropping a unique material. All of them also have their drop chances set to 0%, making these drops unobtainable.

Fortunately, two of the three unique materials the assassins were meant to drop can be obtained by trading with NPCs in Alcamoth, rendering the Assassin Mask that was intended to drop from the Scout Entia fully unused.

The rare drop table is shared amongst all three High Entia assassins.

A set of incomplete and unreferenced drop lists. Judging from their placement, they were intended for Dragon King Alcar.

This drop table goes unused as the enemy associated with it, M65/NOBLE, is also unused.

Memory Space contains 1 common and rare drop table not referenced by any enemies. These drops are almost identical to the drops for the Uragano Nebula enemies from Prison Island, although the rare table here does not include Arts Manual.

The Sureny Telethia has the unused material stone listed in its common drop table, meaning it will always drop one upon defeat... however, its drop rates are set to 0%, rendering it impossible to get a treasure chest from defeating it and this drop cannot be stolen by using Riki's Yoink! Talent Art either because of the nonexistent drop rate.

Junks also has a rare item drop table that go unused as they aren't referenced by any enemy in the game. There are 46 rare drop pools listed that contain almost identical item sets and use the unused Shulk and Reyn "Records" as placeholders for the Arts Manual drops, with the drop rates for the first 26 entries being set as the following.

The drop rates of the other 20 tables looks like this.