From The Cutting Room Floor
< User:Little9070
Jump to navigation Jump to search
This page contains changes which are not marked for translation.
Welcome to The Cuttin' Room Floor. 25,055 articles and countin'!

The Cuttin' Room Floor is a website dedicated to findin and searching for unused stuff from video games, from debug, to unused music, graphics, enemies, or levels, lots of games have content never meant to be seen by anybody that was cut due to time/budget constraints.

make shure to browse our collection o' games and start reading up. lookin for work? Try looking at some stubs and see if you can help. Just have a memory of some unused thing you saw years ago but cant remember how to get it? make shore to make a page with what you saw and we'll take a look. Ya want to help keep this site runnin' and help research fur games?Then pay us!.

Grand Theft Auto III moved on from the top-down action for a 3D-based view, which was well-received by critics and eventually revolutionized the genre of open-world games to a whole new standard.

It has also undergone a wealth of stylistic changes during its development, as evidenced by some leftovers and prerelease media. Many features also got the cut, such as a first-person shooter mode, code for flyable aircraft and even a scrapped multiplayer mode!

Want to help? Not shore what to do? Visit the Help page for everything you need to start, including...

We have a big list of games that dont have pages yet, or pages needin' expansion. 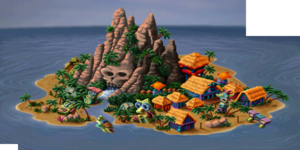 However, included in the general map/title/options/etc is all of the map data for a 2D map screen a la Donkey Kong Country. This map data includes the background graphics and the path points, which reference a removed MapOC file. This map is used in the April 8 build.

In the April 8 build it has a painted 2D picture instead of a 3D model, with no levels being marked by name. Crash is represented by the life icon which scrolls across the three islands akin to Donkey Kong Country, with boss icons representing their respective levels on the map. Pressing Start on the map screen will select a level instead of pausing the game.