Hey, I'm wondering if you know how to hack into the files of Dr. Robotnik's Mean Bean Machine because i wanna see if I can edit things like the sprites and all that. Thanks BoltznNutz (talk) 00:02, 1 August 2018 (EDT)

Hello. Would you mind renaming my account to LaserMoai? Thanks in advance.--GeneralFailer (talk) 09:20, 1 January 2019 (EST)

Hey, I have been using TileLayerPro to try and see the graphics of Kirby's Dream Land. What I can't figure out is where certain graphics (such as the HUD) are, because most of the tiles are garbled... uh... garbage, or other random objects just layered over things. I want to know if there is anyway to fix this and make it easier and clearer to search through. Sultanofswag89 (talk) 18:52, 7 February 2019 (EST)

I just checked and it looks like the graphics are compressed. You'd have to figure out the format and decompress them before you could make sense of anything. --BMF54123 (talk) 17:22, 11 February 2019 (EST)

Probably reverse-engineer the game's decompression routines and write a tool, unless it happens to use a common format that an existing tool already supports. Unfortunately I don't have any experience in doing this (especially for GB games) so I can't be of much help. --BMF54123 (talk) 01:13, 18 February 2019 (EST)

I'm not sure referring to revisions as "PRGX" is really correct. Nintendo refer to the whole ROM when talking about revisions (as seen in the filenames of 3DS Virtual Console ROMs, for example) and I think the "PRGX" naming is just something from GoodTools... --Hiccup (talk) 06:19, 2 March 2019 (EST)

How exactly does Nintendo refer to them? This is something we've been doing for a long time, and seems to be fairly established in the emulation and ROM dumping communities. I don't like referring to the whole ROM when talking about revisions because it doesn't take into account the fact that the PRG and CHR chips can be different revisions (e.g. PRG revision 1, CHR revision 0). --BMF54123 (talk) 06:34, 2 March 2019 (EST)

Nintendo simply refers to the whole ROM as "0", "1", "2" etc - this is the same for all physical Nintendo games from NES onwards it seems. The PRG and CHR chips do have their own revision numbers, but they are never updated "independently" of each other - only as part of a "whole ROM" revision. I've sent you a DM on discord about this. --Hiccup (talk) 07:23, 2 March 2019 (EST)

Regarding the Soulcalibur III article...

Hi there! I have taken note of many of the ways you have contributed to the Soulcalibur III article, and I realize many of them are in light of some of the content in the article not actually being unused or interesting enough to talk about. I will try to make an effort to have the article lack any such content in future edits. Out of curiosity, would normally nonplayable (but technically used) characters such as Colossus (a boss character who has his own fighting style, a unique weapon for said fighting style, and a character model which is way larger than any other in the game) be appropriate or interesting enough to talk about? And would areas featured in ending cutscenes technically being stages with way different collision detection (e.g. a stage from an ending with stairs you can walk on when normal stages wouldn't feature objects like this) than normal stages be interesting enough to talk about? I do feel like many of these things might be interesting to talk about in the article, but am not quite sure if they would be appropriate, and I do wonder what the limits would be for including content of this nature in articles, thanks! --Jaydenyeah (talk) 16:53, 18 March 2019 (EDT)

Anything that is visibly used by the game generally doesn't count as unused material, regardless of how it's implemented, unless there is ample evidence that the player was originally meant to interact with it in some way. A lot of games store things like title screens or cutscenes as level data as a way to reuse existing code, and while you can technically "play" these levels via hacking, you're obviously not meant to do so. While the fact that you can "play" on them is interesting, it falls outside the scope of this wiki.
This also applies to things like unplayable boss characters or NPCs in fighting games. These are almost always implemented in an identical manner to playable characters (why program an entirely different framework just to handle a one-off character?), and should only be documented here if there is evidence that the character was intended to be playable at some point (e.g. has special moves that are triggered with button combos, unused moves that the AI never triggers, or has some kind of ending implemented). If the game crashes or otherwise behaves strangely when you try to interact with one of these characters, you can be 99% sure that it was not meant to be playable.
Feel free to stop by our IRC or Discord (links are in the sidebar) if you have any more questions about this stuff! --BMF54123 (talk) 18:23, 18 March 2019 (EDT)

Alright, I think I now have a better understanding of what kinds of content actually belong in these articles now, I'll be sure to keep this advice in mind and thanks again for helping out, I appreciate it! --Jaydenyeah (talk) 14:27, 20 March 2019 (EDT)

The reason I pulled the trigger on that prerelease article is because I remember discussion of forbidding users from creating subpages that are WIPs of actual articles to be moved into main-space later. But now that I’m looking through archives I can’t find this discussion anywhere. Was this all a hallucination or did this actually become a rule? (in any case I’ll move it to my sandbox which I forgot existed) —AquaBat (talk) 03:12, 25 May 2019 (EDT)

Would Humongous Entertainment's One-Stop Fun Shop games qualify for this site? I thought I read once that art/creation games/programs don't qualify for this site, though I have seen stuff like Nickelodeon Toon Twister 3-D and The Simpsons Cartoon Studio on here. --SpongeBat1 (talk) 20:44, 26 May 2019 (EDT)

I'm looking at adding info on 15 unused pedestrians (and their dialogue) on the GTA San Andreas page, but due to the sheer amount of voice clips (1,857 to be exact), would it be fine if I compile them into a single file for each pedestrian? TheBluegeek (talk) 18:30, 31 May 2019 (EDT)

Apologies for the distasteful screenshot

I would like to deeply apologize for the recent scandal surrounding the addition of a distasteful adult content within the SM Choukyoushi Hitomi Vol. 2/Version Differences page, which lead to the complete deletion of the page. The scandal was caused due to myself not acknowledging the rules and guidelines to this website as a whole, and I am strongly ashamed of my mistakes. On January, I was checking if the screenshots in question was possible to be uploaded onto TCRF with or without any censorship via the Discussion page, getting a 'it might be okay' response from Mr. WarioBarker.So, I assumed that it was okay to upload the screenshots in question. I should have realized that the NSFW template content would only apply until the degree of full frontal nudity and vulgar language. That game crossed the line too much, to the point where it is better seen as 'taboo porn'.Even if this website is important for the videogame preservation, I shouldn't have included the extreme adult content.

Still, I would consider that there are numerous cases where NSFW and NSFL video game which features regional/revisional difference, which is noteworthy to be discussed outside the fields of this Wiki. Based on this instance, I would like to question that, would it be possible/okay to create an alternative variant of the TCRF wiki, which specailizes on those explicit matters?

Thank you for the notice.

It's fine. To be fair, the page was created before rule #12 went into effect, and that particular rule is buried all the way at the bottom of the list anyway. We need to do better in making certain rules and guidelines abundantly clear for new or infrequent users.

Hi BMFRusty. Can you rename me to "AutumnMouse"? I've been meaning to rename my wiki handles for some time, and I just like the sound of that one here. Appreciated. LinkTheLefty (talk) 00:30, 22 September 2020 (UTC)

Thanks for fixing my problems when editing, it’s just that on the Mega Man Zero 3 and 4 page’s title screen part, the text was supposed to be under, but for some reason, it displayed on the top even if I type it under, I could not fix it whatsoever, so thanks for that. TCRFJNPoop (talk) 16:05, 20 October 2020 (BST)

For my PS2 screenshots, the emulator I used was PCSX2 and there was NO screenshot button whatsoever, so instead I had to use Snipping Tool just to get them, I've read the image rules and guidelines today (as well as the regular one some days or months ago), but I don't see any info on Snipping Tool in the page, Is there like a better PS2 emulator that has a screenshot button.

Plus I don't even know if some of my past screenshots were in JPEG or not (I think mostly PNG which is right) and when I replace an image, It displays the past one until later or when I use my other devices (Pokémon Red, Green & Blue was one of them, as I tried to get the Super Game Boy border versions of them, but it displayed the original one but larger and horrible and I used to put Green on the bobscreen part because the Pokémon series section displays as Red, Green & Blue and not Red & Blue).

One more thing, for games that have more versions (like Pokémon or Mega Man Battle Network 3-6) how do you combine them to one screenshot, I used to use MS paint, but before realizing that I shouldn't use MS paint, whoops (although I didn't change the color palletes or anything, just added the other version title screen next to it). Sorry TCRFJNPoop (talk) 17:00, 6 November 2020 (UTC) 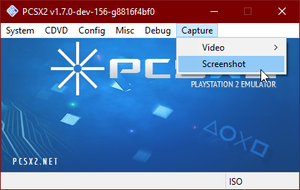 The screenshot guidelines state say that F8 is the screenshot button on PCSX2. Alternatively there's the GSM plugin for Open PS2 Loader that can also take screenshots on a real PS2 (but it's kinda buggy and prone to crashing.) And at that, there is a button for taking screenshots too, unless you're on an ancient version of PCSX2. (I'm gonna take a wild guess and say you're still on 1.4.0 which is like 5 years old at this point) –Edness (talk) 17:41, 6 November 2020 (UTC)

Hi! I've made a more concise and improved video showing the unused car behavior in Ape Escape (relevant article), uploaded onto PeerTube here. What's the best way to go about adding this to the wiki? PeerTube has embed codes, but I don't believe the wiki supports them yet. --Kimimaru (talk) 09:02, 11 November 2020 (UTC)

Hi, I am Chazpelo, a bit more than 5 years ago, I was blocked by you for randomly screwing up pages, 4 years after the ban, I registered my current account, PF94. It appears that this is not allowed, and I broke the rules yet again because this is ban evasion. Well, here's the thing. When I was blocked in late-2015, I was 8 years old. Back then, I didn't exactly knew how to act properly in wikis (got banned on Roblox Wikia for a day iirc, almost got banned from Wikipedia, etc.), Later, in late-2019, when I registered this account, I broke another rule (I think), because at the time I was 12, it took 2 months for me to turn 13 (jan2020).

Basically, am I allowed to contribute to TCRF even though I bypassed a ban that was only caused because I was too young and idiotic at the time? -PF94 (talk) 23:13, 22 December 2020 (UTC)