A port of the first Valis game, which was released after the third game for some reason. 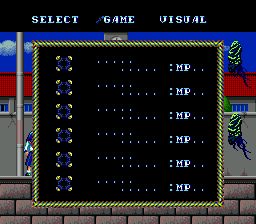 The map select and unused Game/Visual Select menu from Valis III are present in the final ROM, with the Select Map screen at 0x34EA (US) and the cutscene viewer immediately after at 0x3574 (US). The Select Map screen was altered so that only the initialization code remains.

Jumping into this code will crash the game as the rest of the code appears to be absent, though the cutscene viewer apparently does allow you to return to the game by selecting Game and not Visual.

Beginning at address $304 is a message with the instructions for the Controller 2 restore HP/MP cheat.

Press RIGHT & A & B on Controller 2 while the game is paused, and your HP/MP will return to MAX.

This text is located at 0xEDBC, only in the Japanese version: 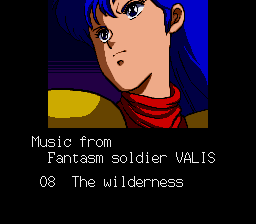 At the title screen, hold A+B+C and press Start to access the game's sound test. Pressing A toggles the sound that plays.