WWF Raw is the third World Wrestling Federation game released for the SNES and the final one based on the WWF Super WrestleMania engine. 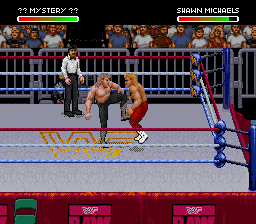 Right after the values for all of the normal wrestlers is an unused one named ??Mystery??. He appears to be a placeholder for a 13th wrestler who wasn't finished (possibly Kwang, who was added in the Sega 32X version of the game).

??Mystery's?? sprites are borrowed from Shawn Michaels, but the palette used gives him grey hair and boots, pale skin, and black pants. When performing certain moves, his sprites change to Bret Hart's. He also lacks a finishing move, a theme song, portraits and a biography on the wrestler selection screen, and graphics for the Titantron that appears when winning a match. There is also a variation of this character on both the Sega 32X version, as well as the Genesis version, where the character instead resembles Razor Ramon.

Use one of the following Pro Action Replay (PAR) codes to play as ??Mystery?? (US version only). The codes take effect after all characters have been chosen.

In the Genesis version of the game, this track is heard when the Royal Rumble champion is declared. The 32X version plays this tune in the main menu. The SNES version instead uses the theme music of the winning wrestler for the former and the title screen music for the latter, rendering this unused. Using the Pro Action Replay (PAR) codes AAFC7012 and EFD27C12 you can hear the unused song during the intro screen and main menu.