WWF SmackDown! is the first in THQ/Yukes' long-running "rassling" series.

With the following GameShark codes, you can choose what cutscene plays next in Season Mode. Most are used in-game, while others either go unused or are very hard to get normally due to the random nature of Season Mode. The accompanying text for many of these cutscenes still exists in the ROM too, though as the cutscenes themselves are incomplete, it stands to reason that the text doesn't show up when they are forced to load.

This one is obviously supposed to be The Rock talking in the ring with a huge brahma bull symbol/statue being lowered behind him (similar to the one below).

This one is the infamous Ministry of Darkness "Sacrifice" storyline that was huge in the WWF in 1999. Supposed to be Paul Bearer and The Undertaker talking in the ring.

The text in the ROM implies that this angle was going to be adapted further than what was shown in the above cutscene, with an unspecified wrestler (likely Stone Cold Steve Austin) entering the ring to foil The Undertaker's plot.

Cutscene of a wrestler gloating to the camera with his championship just to get attacked by two other wrestlers and have his belt "stolen".

An alternate version of the cutscene.

Similar to the above, but with two wrestlers getting attacked and having their titles stolen.

A unfinished duplicate of the "bloodbaths" cutscene that The Brood (Edge, Christian, and Gangrel) used to do. Compared to the used cutscene, the duplicate appeared obviously unfinished – the lights stay on, the animations are buggy, there's no "blood" (in the used version, the lighting goes red to simulate blood), and the cutscene never ends (just loops the last few seconds; the console must be rebooted to get out as a result).

There are two lines missing from the broken duplicate as well, which does appear in the used cutscene: "Damn it! How could he? Somebody stop this!" and "%2 is completely helpless".

A wrestler (based on the animations, intended to be female) "flirting" with a "referee" and having the ending of a match reversed in their favor. This is a strange one, since there's no referees in the game save for Create-A-Wrestler, which may suggest they were planning on adding Earl Hebner at one point. (Hebner's head is one of CAW heads, so you can make one, however.)

The "DMY" file, normally composed of garbage code or left absolutely blank in most games, contains a rather peculiar leftover - a tutorial video from Evil Zone! While its obnoxiously Japanese presence may feel unbelievably out of place inside of a WWF game, it has an easy explanation - Evil Zone was the last fighting game made by Yuke's prior to development on the SmackDown series, and consequently many of its assets may have been imported into SmackDown's code early in development, but then forgot about. This video, strangely enough, wasn't removed when developing the sequel, and still exists in exactly the same file on SmackDown! 2 and the two Simple 1500 games based on the SmackDown! engine.

The video itself specifically came from the TUTO_C.STR file from the English release of Evil Zone.

Strangely, the "Fight!" announcement synonymous with fighting games goes totally unused in the game, likely changed in place of the bell to more accurately mimic wrestling promotions. This ended up used in WWF Royal Rumble for arcades and Dreamcast, which owes existence to this game's engine. This sound has an ID of 128 in the sound test (see below).

Some of the weirdest sounding boos in video game history. They were more than likely intended to correlate to heels or their actions in Season/Pre-Season mode, but were scrapped either due to no such scenario existing in either mode, or because the sound effect in question sounds almost nothing like an actual boo.

A scrapped line which, along with a typo, features an unintentionally hilarious romanisation of wrestling as "wrestring".

Unknown where this may have been used, though it may have been another variation of the generic "superstar gets ambushed" cutscene with different, Rock-specific text.

The routine that displayed the build date on the title screen in the prototype was consigned to the bitbucket, but an updated date string remains. The dates (assuming they are accurate) put the respective final versions four weeks after the leaked early build. The left date/time is for the US version, the middle is EU, the right is JP. It's not a typo, there is 2 minutes difference between US and EU builds; the Japanese build was compiled 3 months later.

The season mode executable houses the descriptions of the unused group menu graphics below. Whatever feature they were intended for took place there.

Grouped with the match HUD graphics are images containing the words "GET", "LOSER", "NO MATCH", "PROTECT", "P" and "THE TITLE" in the match winner font. "LOSER" is possibly to show the losing wrestler, while "GET" or "PROTECT" and "THE TITLE" composed together may be related to title fight/defense matches.

There is a Belt Record option on the main menu, but selecting it takes you to a screen titled "History of the Belt". So this menu title is left out.

Likewise 3-Way and 4-Way Dance are match options, but both come under the Survival menu title rather than their own.

Another graphic concerning wrestler groups. This feature, Create-A-Stable, would be introduced in the sequel; five hardcoded stables in The Rock & Sock Connection (The Rock and Mankind), Hardy Boyz, Dudley Boyz, New Age Outlaws, and Acolytes are available and reflected in tag-team play, however.

A further menu title. Presumably to be placed above a list of superstars.

Selectable options for adding various number of things to something else. Most likely would have been used by the Royal Rumble entrant select.

Jeff Jarrett's mugshot and name exist alongside the other selectable characters, confirming the rumour that he was one of the deleted selectable wrestlers. (As a further proof, he is mentioned by name in Simple 1500 Series Vol.22: The Pro Wrestling's debug menu.) Goldust's don't, debunking that one. Both had left WWF for WCW during development, Jarrett in October 1999 and Goldust in May that year. Because of these rumours, both were added as standard Create-A-Superstar parts in the sequel, although only JJ had a predefined moveset there (Unknown G). Of note that the Double J's mugshot design is based on the prototype mugshot style. This marks the third time Jarrett was cut from a game’s planned roster following leaving a promotion, having previously been removed from WWF In Your House and WCW Nitro for the same reason.

An entrance nameplate unlike any used in the game, and emblazoned with Kane's name. War Zone was, at the time, the name for the second half of Raw is War.

This font is used when selecting player controllers but the smiley face in all its blocky glory stays hidden. 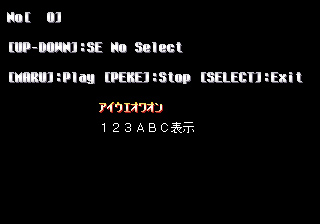 Use the following code to display a sound and text test. This code must be enabled during "Now Loading" at startup.

The Japanese version was called Exciting Pro Wrestling and kept the logo used outside Japan as a small one, to ensure Japanese players knew they're playing an WWF-licensed game. This practice continued until WWE SmackDown! vs. Raw 2006 (called Exciting Pro Wrestling 7 in Japan), after which the Japanese publishing rights went from Yuke's (as the developer) to THQ. For this game, the background of the title screen was redrawn as well.

In addition, the THQ logo used in the introduction in the Japanese version uses the updated logo that would be used by THQ until 2011. Here, the appearance of Yuke's and THQ logo are swapped.