Included with a number of graphics files are plain text files with XML code. These files were likely used to compile the final file packages for the game, and refer to locations on the developer's computer. They all follow this general structure:

There are quite a lot of them, so they will be listed on the Notes page. Don't expect anything too exciting, though.

A placeholder image with "金ハリ" ("Golden Needle") written on it.

These four icons were likely intended for an early map. They are considerably less detailed than the ones featured in the final game. Note that they are normally white and transparent, but have been put on black for the sake of visibility. They are found in the objects folder as env_map_00, with a duplicate as emv_map_00. The icons are named Icon_Treasure00, Icon_Pean, Icon_Melful, and Icon_Treasure01, respectively.

These were likely icons for now scrapped missions. The Bloomsday boss never received a challenge icon, however the icon is very similar to the one used in the file select screen. One icon features a log floating in the water. There is also no "bronze challenge" featured in the game either.

The globe model used in the main menu (with Wario wiggling his butt) contains part of an earlier version of the world map. The mesh, while hidden beneath the main model, is located where Jiggle Jungle is in the final version. According to the name of the texture, this was meant to be Area 1.

There are two unused backgrounds in the files for Wreck Train, section_22 and section_23. Section 22 is an early version of the final's engine room, while section 23 is a rather square engine room. Section 23 also features a pair of square windows, which are never seen in any of the engine rooms in Wreck Train or Derailed Express, though they appear in some of the unused backgrounds for the latter. Unusual among rooms, section 23 also has a set of black spots in the four corners to mark the border of the room.

Glittertown has a set of three unused backgrounds that all have something in common: extra blue shading along the top. They are labeled as section_20, section_21, and section_22. Section 20, while resembling the normal stage background, has shadows that indicate it is meant for a very specific room layout. It also contains piles of chips, which is a feature never seen in any of the backgrounds of Glittertown or Neon City. Sections 21 and 22 follow the common setup for rooms where the city is visible in the background, except the pillars that mark the entrances lack the texturing used in the final. Note that all of these backgrounds still contain text, which was removed from (almost) all of the backgrounds in the final. Copies of these files exist in the directory for Neon City as well.

Included with the files for Derailed Express are two unused backgrounds, section_21 and section_22. Section 21 is a relatively small room that uses the design of the Derailed Express's engine interior. Meanwhile, section 22 is an earlier version of the engine, with the interior and chimney exit being part of the same exact room. And, while the background itself is not unused, the background for the first engine room has extra details behind the foreground and beyond the player's view. Specifically, windows in the upper left- and right-hand corners. Note that the left side of the background is a lot like section 21.

This early version of Glittertown's casino background, found in the first slot machine room, has English (well, Engrish) text on various parts of the board that was removed from the rest of the backgrounds in the levels. This one was likely missed due to the room being so small, so that none of the text shows up. The text does show up, however, in the hidden money room at the end of Neon City.

When selecting the Pirate Shop from the map screen, the player is taken directly to the shop. Files for a pre-shop stage do exist, however, in the location where these files would normally be stored for the second stage of the first world. It was likely removed for adding unnecessary delay for simply buying an item or two. Also, take note, the railing featured to the left is a separate layer from the building structure.

The door to the shop, complete with animation, goes unused for the same reason. The above level layout is the background for it, note the darkened doorway which is just the right shape for the unused door object. 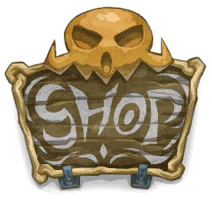 Found along with the graphics for the shop door, this sign would have been placed above the door space. Both of these objects can be found in the file shopgate_00, with duplicates in syrupshop_00. The difference between these two files is that shopgate has both objects in a single model, while syrupshop has them separate.

The sixth area, the Shakedown Schooner, has files for two stages, despite only having one location to choose from. The stage labeled stage_01 is the one used in the game, while stage_00 appears to be an earlier version of the ship's deck. The art for the two versions are practically identical, although the graphics are shifted over a bit between versions. The main difference is that the unused version has the entire ship's width, while the used version cuts off past the doorway. The textures for the unused version have half of the ship, which is then mirrored by the models. Another copy of this early duplicate exists as level_01 in stage_01, and again as section_20 of level_00 of stage_01. 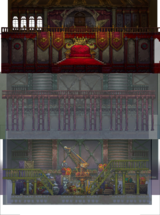 There are two versions of the Shake King battle room included in the files. The one in section_21 has a very different basement setup, with an industrial crane and piles of treasure instead of robots and machinery. Note that the image above is only the background, which has six layers. One very important difference is that this implies the first battle previously had three phases, or that all three phases were meant to be in the same map, whereas the final version only has two before switching to a new map.

There is a build date in the dol. Interestingly, the Korean version was built 2 years, 7 months and 28 days before it was released (on April 14, 2011). It was also manufactured around the same time, as according to the manufacturing code printed onto the disc, the print run (or one of the print runs) was started on October 9, 2008.

Only minor differences exist amongst the various releases of Wario Land: Shake It!. Outside each using its native/popular language, the most major difference include the North American release's "Shake It!" and the European release's "The Shake Dimension." There are also a few minor graphical differences between the NA and EU releases, with the NA release having a bolder outline and the "Wario Land" lettering much closer together.

As seen below, the normal speech bubbles were replaced with jagged ones to accompany the banging sound from inside the cage.

When Wario's power gauge is full, "! SHAKE !" appears in the Japanese version, whereas the international versions uses Wario's "W" emblem.

The Japanese version has the text "Now Loading" with interpunct character next to it. This was changed to ellipsis character for the international versions. The European version changed the text to "Loading".

The file that contains the names of all stages has some interesting differences. While the main levels are the same, the hidden levels were shuffled around a bit. For most areas, the first and second secret levels were swapped. The main difference is that Launchpad Labyrinth was meant to be part of Area 1, hence reusing the level theme from Stonecarving City. For those who are curious, the full list can be found on the Notes page.