Wario Land II is the popular sequel to the popular Wario Land: Super Mario Land 3, in which Wario collects treasure while being squashed, set on fire, zombified, and all sorts of other fun stuff. It received a Game Boy Color port surprisingly quickly, with the Japanese release coming out just seven months after the Game Boy version's American release (note that the Game Boy version never came out in Japan), though the transition to color was... varying in quality.

Interestingly, despite its name, Wario Land II is actually the third game in the series; the second was Virtual Boy Wario Land, but given that game came out on the Virtual Boy, Nintendo doesn't really acknowledge it.

These are larger versions of the coin and button graphics used in the Matching Game.

Go to the cellar!!

These two graphics are similar to the graphics used in the levels from the chapter "Go to the cellar!!". The difference is that these graphics have less detail than the ones used. It is possible that these were intended for areas in the levels that had dimmer lighting.

This tileset appears to be completed, but it is never used in-game. Unlike every other tileset used in the game, the numbers 1-4 are not in the top-left portion of this tileset.

These graphics look like they were intended to be used with the giant snake boss.

These graphics were probably meant to be used as another way of catching Wario on fire.

This copyright graphic is part of the font set used in the game's endings. This was created before the game was delayed to 1998.

One of the unused objects in the object set as the room with the floating jug is a jug without the ability to spin. Another object in that set is a jug spawner. It is similar to the cabinet spawner found in "Turn off the giant faucet".

Like the cabinets, the jugs react to water current, although this is never seen in-game.

Levels that use the same tileset as "Go down to the cellar" contain an unused tile. This tile causes Wario to slow down when standing on it, limiting his speed and jumping height. He also cannot dash or duck when on this block. Similar to the conveyor belt in the factory levels, holding an enemy while on it causes it to act like a normal block. Part of this object can be seen on the floor of a pre-release screenshot.

In the level "Hold on to the owl", there are four 10 Gold Coins that cannot be reached. Most likely, the developers forgot to change the wall from solid to breakable. 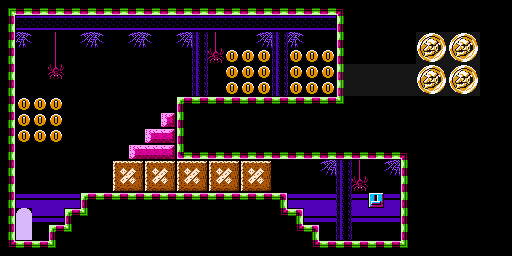 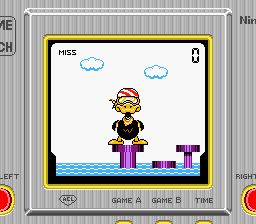 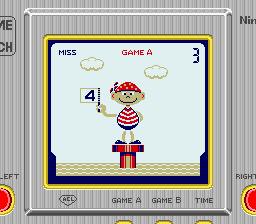 Interestingly, Flagman D-D is actually taken from the obscure Game & Watch remake released only in Europe, cementing the confusing Game Boy Gallery series as the first real entry. Palette changes and graphic swaps were most of the alterations. Some code was changed and removed from the original. Nintendo decided to keep the original border as an added bonus. Flagman D-D likely uses the Game B setting, as seen by the pipes.

Fonts, music, and all sound effects from Wario Land II are present in the Game Boy Color Promotional Demo. Nintendo likely built the tech demo using Wario Land II, probably because they wanted to save some time and quickly borrow the graphics and sound effects necessary for recreating the cutscenes.

The later Japanese version, which first added Game Boy Color support to coincide with its release, has additional differences.

The International version differs slightly from the original release (seen above) in that the copyright, island and number are moved slightly upwards, and a border surrounds the logo. The Japanese release retains these details, but the roman numeral II was shifted down and changed to the standard arabic numeral 2 with a different texture, Wario's eye was also added to the O rather than it being merely filled in, and the "Wario Land" logo has its katakana equivalent (ワリオランド) and a "W" emblem underneath it (all of which can also be seen in a pre-release screenshot that predates the international release).

Compared to the original release, the image was touched up slightly when played on a Super Game Boy, although a few pixels in the water are mistakenly given the wrong color. On the Game Boy Color, among other general changes, the International version also corrected the numeral's color to red to reflect the box art (even though the palette change also affects the castle). In addition, the ™ symbol in the International release was changed to a ® symbol in the Japanese release.

The intro scroll was shortened in the Japanese release, likely due to the smaller amount of text required.

In the Japanese version, the penguin enemies carry and toss full beer mugs. In other versions, they are bowling balls, though the effects are still the same (which explains why Crazy Wario acts intoxicated until reaching water).

Even if the game is played on a Game Boy or Super Game Boy, the Game Boy Color version loses a few graphical details. This is presumably due to palette issues--the window graphic in the above screenshot uses four colors, so if the arch at the top were kept, it would result in part of the surrounding wall turning blue.

In the original release, a unique fish enemy can be found in the "Turn off the giant faucet!" and "Escape from the Tea Cup!" levels. The fish is able to move both horizontally and vertically. When it sees Wario, it will try to catch him. Once the fish has caught Wario, it will pull him towards a wall and hold on to him until he escapes the fish's grip. It also seems to be connected to the boss of the "Escape from the ruins!" level, which has a similar attack and design and is named "Big Kamukamu" in Japanese sources, implying there should be a small version of it.

For whatever reason, this enemy was removed from the Game Boy Color version and replaced with the standard sawfish enemy. However, its graphics remain in the same object set as the room with the floating jug, and it even has a colorized version.

Because the game is locked in Game Boy Color mode, it cannot be played in monochrome Game Boy mode or with its Super Game Boy borders.