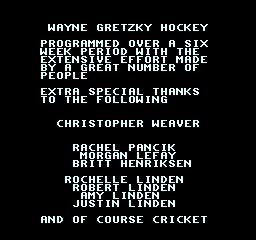 This code can be entered with either controller, and can also be done in Bethesda's other NES games (Home Alone and Where's Waldo?) to bring up a similar screen. Unlike those two, which are identical aside from the game's name at the top, the screen here is a bit different – most notably, the use of white text and the mention of being programmed over a six-week period.