Where's Waldo? is an NES game based on Martin Handford's popular series of books, where the goal is to find Waldo in various pictures. Unfortunately, in the case of this game, that's easier said than done thanks to the NES's limitations; try finding an extremely specific jumble of pixels in one large jumble of pixels. Most of the time, the jumble of pixels doesn't even resemble Waldo's iconic red-and-white stripes, and on harder difficulties it seems like he changes the color of his clothes and even skin. 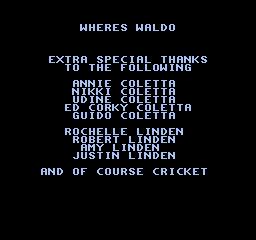 This code can be entered with either controller, and can also be done in Bethesda's other NES games (Home Alone and Wayne Gretzky Hockey) to bring up a similar screen.

Track 4 on the NSF is a short, looping tune that isn't heard in-game. This song was most likely supposed to be used as a pause tune, as Wayne Gretzky Hockey plays the same song when you pause the game. However, Where's Waldo? does not have an option to pause the game.

Also, the Found Waldo jingle is much longer than what is heard in-game, where it cuts off after the first few beats. The full song can be heard in Wayne Gretzky Hockey, which shares a few of the same songs.