Where in America's Past is Carmen Sandiego? (Mac OS Classic)

They say that the past is a foreign country.

Turns out it's just the U.S., though.

This dialog suggests some sort of demonstration mode (aimed at educators?), but there's no sign of how to invoke it.

...and the third handled everything else. 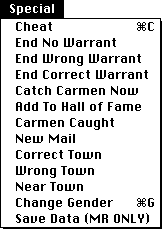